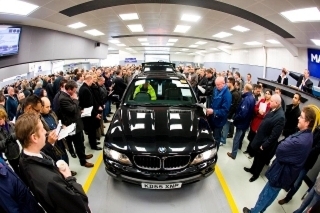 The firm added that the year-on-year rise could be attributed to a number of things. Firstly, de-fleeted units in 2015 are markedly younger than similar stock in 2014. In May of this year, the average ex-fleet vehicle was 51 months old – four months younger than the average unit in 2014. Manheim adds that a quick look at the age of stock from May 2014 to now reveals a direct correlation between maturity and value.

When de-fleeted vehicles were at their oldest (54 months in October 2014), a corresponding dip in value could be witnessed. This may also have been influenced by external shifts, such as an increase in pricing pressure, and conformity to seasonal norms.  Conversely, January 2015 has a yearly record low for vehicle age (at 48 months), which was reflected by an upturn in average selling price. Again, this may also have been the result of external patterns – January’s market was incredibly robust, which could have directly influenced values.

Daren Wiseman, valuation services manager at Manheim, commented: “It’s not as simple as saying ‘the newer the car, the higher the selling price’, but it’s no secret that a vehicle’s maturity plays a central role in determining its value. Obviously, age is just one factor. To command top-drawer prices, a de-fleeted vehicle needs to have a relatively reasonable mileage and should be in best-quality condition. External influencing factors, such as demand, might lie out of our control but shouldn’t be ignored.”

Manheim’s Market Analysis also showed that only one vehicle segment recorded a higher value in May than in April, with the compact executive seeing average selling price escalate to £9,258. Perhaps reflective of the wider trend discussed above, compact executives were, on average, two months younger than those sold in April.

Wiseman concluded: “It’s now the halfway point of the year so an ideal time for those in the de-fleet game to take stock. Values are certainly looking robust and quality of the stock seems to be high. Like I said last month, there’s plenty of great stock in the market at the moment. It’s younger and has fewer miles on the clock, so we could see buyers rushing to snap this up while the going is good.

“It’s been a busy and productive start to the year, with some great values achieved. Looking ahead, I’m confident that the latter part of 2015 can be just as good if not better. To make sure they’re getting the most out of their stock, I’d advise those in the de-fleet sector to ensure their remarketing strategies are up-to-date and meet the needs of their customer-base.”