Fleet managers are being urged to invest more time delivering fleet driver training in a bid to improve driving standards. 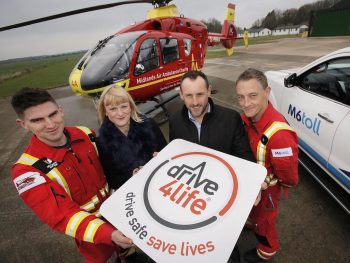 So says Midlands Air Ambulance Charity, as it highlights the increasing cost of road traffic collisions (RTCs), both to fleets, including in terms of repair bills and rising insurance costs, and also to the charity.

Each air ambulance mission costs Midlands Air Ambulance £2,500, funded through local businesses and the communities it serves. In 2018, the charity attended 672 RTCs, which cost £1.68m.

In response, the emergency pre-hospital service has launched its ‘Drive4Life’ campaign in partnership with M6toll as it also draws attention to the rising number of RTCs; as an example in 2017 this increased 23%, which equated to almost two per day, and this figure rose once again in 2018.

Emma Gray, fundraising and marketing director for Midlands Air Ambulance Charity, said fleet managers have an important part to play in helping to reduce these rising RTC figures. She explained: “While we’re aware that many fleet managers are committed in delivering staff training, we feel more can still be done.

“Ongoing, regular fleet driver training for heavy road users will remind drivers about the perils associated with spending vast amounts of time in their cars which as we know, can impact hugely on concentration. Indeed, Government research suggests that almost 20% of accidents on major roads are sleep-related with driver fatigue alone a huge issue for fleet managers.”

James Hodson, director of motorway operations at M6toll, added: “While statistically the M6toll is one of the safest motorways in the UK, we are always grateful for the lifesaving support of the Midlands Air Ambulance when accidents do occur.

“We are so proud to support this valuable campaign, helping to communicate vital road safety messages to drivers across the Midlands and beyond and we’d urge fleet managers to do the same.”