Citroën is celebrating the 50th anniversary of the pioneering and quirky GS with the launch of its spiritual successor, the C4 – itself a reinvention of the C4 Cactus. 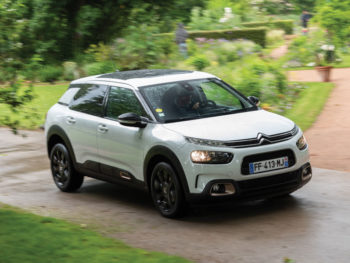 The new SUV-styled C4 will confusingly replace the C4 Cactus, returning to the hatchback’s name despite retaining an SUV silhouette

Citroën has a great historic background in the lower medium sector, from the classic GS that’s celebrating its 50th birthday this year, right up to the current C4 Cactus.

With a new C4 due at the end of this year, Arnaud Belloni, Citroën’s marketing and communications director, told Fleet World more about the new car.

“The design is really astonishing, unique and exciting. Plus, the onboard technology is really competitive for the segment – it is really going to be a true Citroën.

“It will have a bold design, in a way that people will love it and buy it. It will have good technology content, and of course it will be available in full electric, diesel and petrol. There will be the choice of one body, with three choices of powertrain.”

Citroën models are known for their expressive designs, the new C4 which was originally replaced by the SUV-styled C4 Cactus is now going back to the C4 nomenclature, only this time in SUV guise. Citroën has also seen its popularity rise in recent years, Belloni remarks:

“We were selling 600,000 cars in Europe six-years ago, now we sell 835,000. So obviously our cars are successful. We have also been able to conquest people, something we’ve not done before.

“In the new C4, you will see useful technology for the people, you will see clever inventions in the car, and the design is audacious – but not risky enough for us to not be able to sell it.

“It’s definitely a Citroën and not neo-retro, Andre Citroën never wanted to design the same car, in the Citroën story we always start from a blank page.”

Rather sooner than the end of the year, Mr Belloni revealed another Citroën electric surprise will be revealed at the end of this month – most likely to be a production version of the Ami One concept first shown at the 2019 Geneva Motor Show.

What’s interesting about this quirky urban model, is that it is going to be made available to rent for periods up to five hours through a car sharing scheme run by PSA’s own mobility company Free2Move Lease.