Elektrik Technik: How Audi’s electric SUV will disrupt the market

By Contributor / 2 years ago / Features / No Comments

Kyle Fortune rides along with Audi’s E-tron as it undergoes final testing, the plug-in electric SUV certain to be a disruptive player in the traditional fleet market. 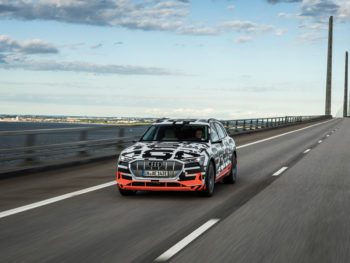 It is predominantly people presently, too, admits Ed Jones, Audi’s national contract hire and leasing manager, with the retail/fleet split of EVs currently hugely in favour of personal, retail buyers. What the E-tron represents, then, is huge opportunity, and it’s one that Jones relishes. The fiscal advantages are clear for BiK users, though the sustainability too is motivation for customers, buying an EV being something of a statement.

“Previously EV’s have been limited by compromise,” says Jones. “The E-tron will change that, but we need to articulate that to customers.” Its useable, real-world range, and fast charging potential – an 80% charge possible with a 150kW high capacity charger in just 30 minutes will be instrumental in that, the E-tron spearheading a charge that will see Audi have as many as 20 EVs and plug-in hybrids in its range by 2025.

For Audi’s engineers the E-tron has been a challenge, because its drivetrain throws up new issues. There’s less ‘masking’ of noise from the drivetrain as it’s all but silent, so aeroacoustics have played a huge part of its development. Indeed, on top of the usual, conventional testing cycle a new model goes through almost 250 E-tron prototypes have driven more than five million kilometres, or 125 laps of the Earth – it’s spent over 1,000 hours perfecting its shape in the wind tunnel.

Reducing drag has been such an obsession Audi is offering the E-tron with cameras in place of conventional mirrors (optionally, and in markets where it’s allowed, legally) to reduce drag. These, in combination with other wind-cheating measures gives the e-tron a drag figure of 0.28, some 0.07 less than a vehicle of similar proportions, that 0.07 improvement equating to additional range in the region of around 22 miles from the battery. Air suspension that drops at speed, ultra low rolling resistance tyres – with sidewall lettering inverted rather than raised to reduce turbulence – also feature, all in a bid to maximise the E-tron’s range.

Sitting in it, it’s typically EV quiet, the 355bhp/487lb.ft from the pair of electric motors allowing a 0-62mph time of around six seconds and a 125mph top speed. There are various drive modes, including all those off-road ones associated with a traditional SUV, which means this is an EV that can venture off-road. Not that any will do so, but it’s good to know it can.

As to the fleet potential, Jones is hugely optimistic, saying there is a real perception change in the marketplace, the huge interest creating demand. That’s crucial if the forthcoming generation of EVs are to conquer the current issue of poor retained values, though that’s steadily changing. The charging infrastructure still has a bit of catching up to do, too, Audi saying it will point users to a portfolio of suitable suppliers for work or home charging units, while looking to educate E-tron customers. “We’re on the crest of a wave,” admits Jones, the E-tron, and its rivals certain to have a disruptive effect, though the goal is to achieve that without compromises.