A new e-cargo bike delivery and food waste service said to mark a first in Scotland has launched in Glasgow. 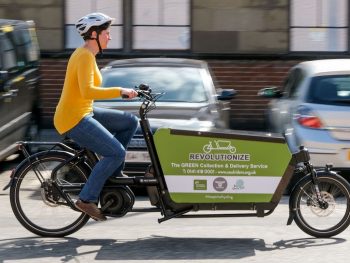 SoulRiders’ ‘Revolutionize!’ e-cargo bike delivery and food waste project is now up and running in Glasgow

The new e-bikes on the ‘Revolutionize!’ scheme will help tackle traffic and pollution issues in the city by reducing the number of delivery vehicles on the streets. They will also help Glasgow with its work to become the UK’s first net zero city.

SoulRiders will also tackle social issues such as food poverty by working with food share initiatives to deliver food to some of the city’s most vulnerable communities. A COVID-19 distribution site is also being enabled to support the elderly, isolated and vulnerable with essential supplies.

The project has got off the ground with the help of a £140,615 grant from SP Energy Networks’ Green Economy Fund, as announced last year, and has now unveiled its new e-bike fleet at an event presided over by Alison Thewliss, MP for Glasgow Central, and green economy fund manager, Jillian Violaris.

Rashid Khaliq, chief executive, SoulRiders, said: “We believe our project will reduce the number of vans and lorries on our streets and provides a solution to many issues including traffic and pollution in cities. We are proud to play our part in Scotland’s thriving green economy and to be receiving this crucial support from SP Energy Networks.”