Daimler to step up pace on shift to electric mobility

Daimler has said it will accelerate its work on shifting to electric mobility as it revealed better-than-expected results for 2020. 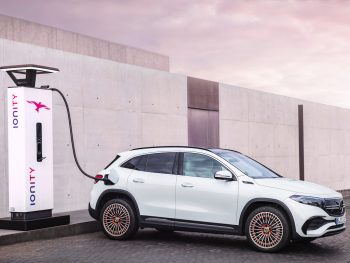 Mercedes-Benz Cars will significantly expand its EV line-up this year, including the EQA crossover. But the brand says charging infrastructure alongside vehicles must also be a focus

Speaking today (31 March) at the company’s virtual regular Annual Meeting, Ola Källenius, chairman of the Board of Management of Daimler AG and of Mercedes-Benz AG, said Daimler has the broadest electric range in the automotive industry – from city cars to heavy-duty truck – but wants to expand its work further.

Daimler’s Ambition2039 plans were revealed in 2019 and set out that it was targeting a completely carbon-neutral new car fleet by 2039 and seeking for plug-in hybrids or all-electric vehicles to make up more than 50% of passenger car unit sales by 2030.

Källenius commented: “We want to accelerate the electrification of our product portfolio. Almost two years ago, we presented our Ambition2039. We want a CO2-neutral fleet of new cars. It’s our goal to reach this target sooner.”

However, details of the new targets have not been set out yet.

This year will see Mercedes-Benz Cars significantly expand its offering of fully electric vehicles, including the EQA electric crossover, followed by the EQS luxury saloon due to be revealed in April. The EQB SUV will also arrive this year along with the EQE executive saloon.

Mercedes-Benz Vans will also gain new electric vehicles: before the end of the year concepts for an electrified version of the Citan and the renamed T-Class passenger-carrying variants will be presented.

Daimler is the latest OEM to ramp up its electric targets; Ford announced last month that its passenger vehicle range is to go all-electric in Europe by 2030, while Jaguar has said it will become an all-electric luxury brand from 2025 and Land Rover is projecting to go all-electric from 2036. And Volvo is to become a fully electric car company by 2030 and move all sales online as it looks to future-proof its business.

However, Daimler said an efficient public charging infrastructure that expands to keep pace with the electric ramp-up of manufacturers is a prerequisite for the breakthrough of electric mobility.

To meet the European Commission’s CO2 targets, Europe needs three million public charging points by the end of the decade, it added.

“Today, we don’t even have a tenth of this. We need to speed this up. Daimler, as part of the auto industry, will play its part. For example, we will further expand the Ionity charging network. I am convinced: when industry and politics work hand in hand, we move forward together. We should not focus our efforts only on banning the status quo. We should make possible the new, this is key,” said Ola Källenius.

At the annual meeting, Daimler also reaffirmed plans to spin off Daimler Truck and list it on the stock exchange, transferring a significant majority stake to Daimler shareholders, while the existing cars and van business will be renamed as Mercedes-Benz in due course and be positioned as the “world’s pre-eminent luxury car business, committed to leading in electric drive and car software”.

The planned spin-off will come under voting at an Extraordinary Shareholder’s Meeting which is planned to take place in the autumn of 2021.
Daimler also said the 2020 financial year had proved better than expected and that it was confident about the current financial year, despite temporary bottlenecks for semiconductors.