Jaguar is to become an all-electric luxury brand from 2025 under a new Reimagine strategy that will streamline Jaguar Land Rover and enable its net zero plans. 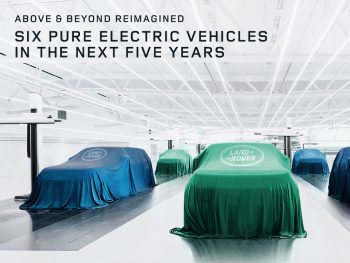 The first all-electric Land Rover model is due in 2024; one of six pure electric vehicles planned to launch in the next five years

Unveiled this morning by CEO Thierry Bolloré in an online presentation, the strategy also sets out that the first all-electric Land Rover will arrive in 2024 and that all Jaguar and Land Rover models will be offered in pure electric form by the end of the decade.

The plan sets out the electrification of both Land Rover and Jaguar brands on separate architectures “with two clear, unique personalities”.

By 2025, Jaguar is to “emerge” as a pure electric luxury brand with a “dramatically beautiful new portfolio of emotionally engaging designs and pioneering next-generation technologies”.

This will not however include the planned pure-electric Jaguar XJ replacement announced two years ago.

And rather than using the forthcoming new Modular Longitudinal Architecture (MLA), future Jaguar models will be built exclusively on a pure electric architecture; with its Solihull factory central to both platforms.

The strategy will also see six pure electric Land Rover variants arrive in the next five years, covering the Range Rover, Discovery and Defender families; the first all-electric variant will arrive in 2024. These will be built on the MLA platform as well as the pure electric biased Electric Modular Architecture (EMA).

By 2030, the plan is for around 60% of Land Rovers sold globally to be equipped with zero tailpipe powertrains.

JLR is also exploring hydrogen fuel cell power as part of its aim to achieve net zero carbon emissions across its supply chain, products and operations by 2039.

Development of hydrogen fuel cell models is already underway with prototypes arriving on UK roads within the next 12 months as part of the long-term investment programme.

The investments in electrified vehicles and connected technologies represent annual commitments of circa £2.5bn.

CEO Thierry Bolloré said that JLR’s plans would bring a streamlined structure to deliver greater agility and promote an efficiency of focus.

JLR added that it would retain its plant and assembly facilities in the home UK market and around the world, although they will be “rightsized, repurposed and reorganised”.

The plan is to put Jaguar Land Rover on a path towards double-digit EBIT margins and positive cash flow, with an ambition to achieve positive cash net-of-debt by 2025.

Its aim is for Jaguar Land Rover “to be one of the most profitable luxury manufacturers in the world”.

Bolloré concluded: “As a human-centred company, we can, and will, move much faster and with clear purpose of not just reimagining modern luxury but defining it for two distinct brands. Brands that present emotionally unique designs, pieces of art if you like, but all with connected technologies and responsible materials that collectively set new standards in ownership. We are reimagining a new modern luxury by design.”

The Society of Motor Manufacturers and Traders (SMMT) said JLR’s long-term commitment to the UK was very welcome but called for government support.

Chief executive Mike Hawes said: “Its roadmap to a future that is built around sustainability, with electrified and hydrogen models as well as investment in connected and digital technologies, aligns with Government ambition and increasing consumer expectations. Delivering this ambition, however, will require the UK to improve its competitiveness. The UK automotive industry is essentially strong, innovative and agile, but the global competition is fierce. Government must ensure advanced manufacturing has its full support, with a policy framework and plan for growth that reduces costs, accelerates domestic battery production and electrified supply chains, and incentivises R&D and skills development. Every effort must be made to create the conditions that will enable the entire sector to flourish.”

Previous: Local authorities get £500m to fix potholes across England
Next: EVs and PHEVs account for 16.5% of new orders at LeasePlan