The Government is being urged to take a longer-term approach to local road maintenance funding as new research finds the one-off cost of getting local roads in England and Wales up to scratch remains in excess of £10bn. 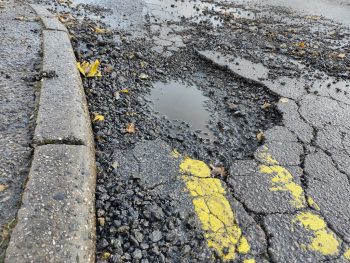 Although highways maintenance budgets are up 15%, budgets reported by local authorities are still lower than they were two years ago and road conditions have yet to see any significant improvement

According to this year’s newly published Annual Local Authority Road Maintenance (ALARM) survey, the legacy of inconsistent funding in England and Wales is still preventing highway engineers from being able to provide long-term, cost-effective maintenance improvements for local roads.

The survey, now in its 26th year and published by the Asphalt Industry Alliance (AIA), reports a 15% increase in highway maintenance budgets which were, in part, due to additional funding from the Government, including the Pothole Fund announced in last year’s Budget for England, as well as supplementary pots to support changes as a result of Covid-19 needs and ambitions for increased active travel.

But budgets reported by local authorities are still lower than they were two years ago, and road conditions have yet to see any significant improvement.

This is borne out by the large increase in the number of potholes filled over the last 12 months in England and Wales, the equivalent of one being filled every 19 seconds.

Meanwhile, the average frequency of road surfacing is now once every 68 years.

Local authorities also report that, despite the increase in budgets, target road conditions still remain out of reach. If they had enough funds to meet their own targets conditions across all road types, there could be an additional 14,400 miles of local roads in a good state of repair and another 2,000 fewer miles in need of urgent repair.

Instead, the report says a longer-term approach is needed to stop the current “wasteful patch-and-mend repair” solution.

Rick Green, chair of the AIA, said: “While the extra funding in 2020/21 was welcomed, using it to repeatedly fill in potholes is essentially a failure as it does nothing to improve the resilience of the network.”

He continued: “It is clear that a longer-term approach to local road funding is needed, similar to the five-year commitment made to the strategic road network in the two Roads Investment Strategy (RIS) periods, to allow local authority highway engineers to plan ahead and implement a more proactive, sustainable and cost-effective whole-life approach to maintaining the network.

“This commitment is vital to the nation’s post-pandemic reset in which we will rely on our local road network to support recovery and underpin active travel and levelling-up goals.”

“Potholes are a nuisance and not only cause expensive vehicle damage but can also lead to serious injury or even worse. Without a long-term approach to local road maintenance funding, similar to what we already have for strategic roads, we face our roads remaining in a perpetually poor state. The Government must now change tack and ring-fence a small proportion of existing fuel duty revenues over a five-year period so that local authorities are able to plan routine maintenance properly and get our local roads up to a fit and proper standard.”

The report has been published as new Kwik Fit research finds the cost of pothole damage is rising despite a drop in driver mileage during lockdown, with drivers reporting worse conditions.

Research by Kwik Fit for its PIT Report (Pothole Impact Tracker) this year has found drivers are hitting an average of 11 potholes per month, and some 10.2 million have suffered damage to their car as a result. As a result, the total cost to British drivers from pothole damage over the last 12 months rose slightly to £1.27bn compared to £1.25bn for the year to March 2020.