Calls for solutions to ‘astonishing’ cost of UK congestion 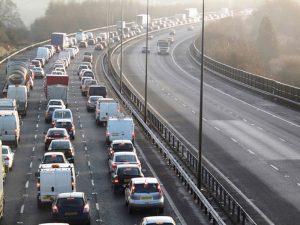 UK drivers lose 31 hours to congestion each year, according to Inrix data.

That’s the finding of latest research by traffic data firm Inrix as experts call for “innovative” new approaches to congestion, including road charging and even artificial intelligence.

London was, unsurprisingly, the UK’s most congested city for the 10th year running with motorists spending approximately 74 hours a year in congestion during peak times, costing £9.5bn as a whole – up nearly threefold from £3.3bn in 2016.

With the Office of National Statistics showing more cars on the road than ever before innovative new approaches need to explored, according to Inrix chief economist Dr Graham Cookson: “Increased flexible working or road charges have potential, however, transport authorities should be looking to exciting developments in data analytics and AI which promise to reinvent our approach to traffic management.”

However, the RAC said there was no “silver bullet” to sorting congestion as it highlighted that “with few viable transport alternatives outside major cities, having access to a car is simply a necessity for millions of people” and called for more emphasis placed on providing cheap, practical, reliable alternatives to the car – in particular for urban areas.

RAC spokesman Rod Dennis also said urban planners should look at how maximising vehicle flow, such as traffic light sequencing and cutting the amount of time roadworks are live for while employers should encourage greater car sharing.”

The findings have also renewed calls for the Government to explore road user pricing just weeks after research suggested implementing tolls in the long term and VED changes in the short term could be vital to ensure commitments to ring-fencing national roads funding from 2021.

Emeritus Professor Roger Vickerman, from the School of Economics at the University of Kent, said: “We already have blunt instruments such as the London Congestion Charge, but a sophisticated system of electronic tolling would charge drivers for their actual use of the system and by differentiating by time of day can encourage those with flexibility to adjust their journeys to times of lower traffic volumes.”

He added that such a system would provide a much fairer means of charging motorists compared to current taxes and reflect levels of congestion.

“The overall cost to road users would be less; the estimated average cost of that 31 hours of wasted time is £1,168; that would pay for a lot of miles. Politicians need to grasp this nettle now.”