The number of breakdowns linked to AdBlue almost doubled last year to 23,000 according to the AA as driver ignorance over the chemical and its use in diesel vehicles both continue to grow. 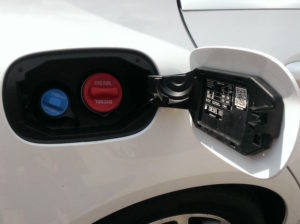 The solution plays an essential role in ‘Selective Catalytic Reduction’ – or SCR – technology which has been used by many car and van makers since 2015 to substantially reduce emissions of nitrogen oxides (NOx) for diesel engines to meet Euro 6 standards. Diesels made by Jaguar, Land Rover or any French or German makers, and registered new after September 2015, are likely to use AdBlue.

AdBlue – also known as Diesel Exhaust Fluid or DE – is a liquid solution of urea, which is sprayed into the exhaust stream of diesel vehicles to break down dangerous NOx emissions into harmless nitrogen and water.

Cars with this technology have a separate filler for an AdBlue tank – often next to the diesel fuel filler or in the boot or under the bonnet and typically with a blue cap – that needs refilling as required. AdBlue is not a fuel additive and should never be added directly to the fuel tank.

AdBlue needs to be replenished periodically – the AA says the range between refills could be somewhere between 3,000 and 12,000 miles – although the exact intervals between top-ups will vary depending on the car and driving style. The product is usually sold in bottles at forecourts although some have started to install separate pumps.

The problem lies in the fact that SCR vehicles will not start if the tank is empty – while performance will be limited to ‘limp home’ mode if drivers run out of AdBlue mid-journey – and although SCR vehicles come equipped with dashboard warning lights that operate when the AdBlue needs topping up and will advise of the miles left until it will run out altogether, many drivers don’t understand what the warning means and ignore it, with disastrous results.

Meanwhile other drivers are making mistakes with refills, including putting it directly into the fuel tank, which could cause expensive damage to the fuel pump and injection system. If the mistake is realised before the engine is started, the tank will require flushing out and refilling with diesel in the same way as if petrol had accidentally been put in the tank. But If the engine is started it could become an expensive write-off.

Edmund King, AA president, explained: “Our recovery service is seeing a rapid growth in breakdowns due to accidental misuse or lack of understanding of the need for AdBlue.

“Many drivers call for help because they can’t start their car simply because the AdBlue tank has run dry. That comes as quite a shock to many AA Members, particularly those who don’t regularly drive a diesel car but may be in a hire or fleet car and have no idea what it is or does. The AA assisted some 23,000 drivers last year who had simply run out of AdBlue.

“We have also attended at least one driver who filled their diesel tank with AdBlue.”

The AA added that most diesel drivers will need to top up the AdBlue at least once between services, so it’s important to keep an eye on dashboard warnings, particularly for high-mileage drivers.

King continued: “Although the dashboard will give plenty of warning that the AdBlue tank needs replenishing, many drivers don’t understand what the warning means and ignore it. Our message is keep your tank topped up to avoid the AdBlue blues.”