A Bridge Too Far?

Seven countries, over 700 miles, one tank of diesel – after a marathon driving session, can the new Insignia Grand Sport lure drivers back out of the premium brands? Alex Grant finds out. 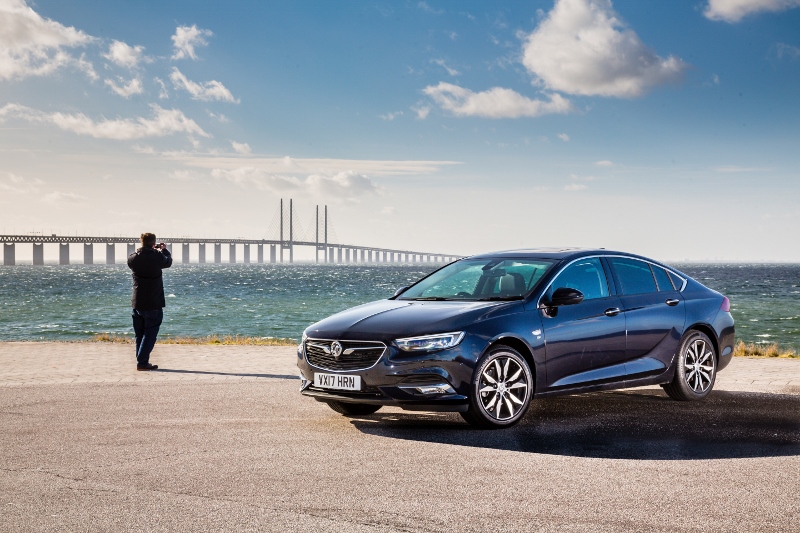 Looking back across Øresund straight from the coast of Malmo, I’m struggling to find the shutter release on my phone camera. The arc of concrete bridge connecting Sweden with Denmark is a view I’ve long wanted to take in, but with no windbreak between us and Copenhagen the cold Scandinavian breeze is numbing my fingers enough to make a digital version hard to capture. Possibly harder than the 15 hours of driving that had brought me, and Vauxhall’s second‐generation Insignia, all the way here.Crossing the Channel 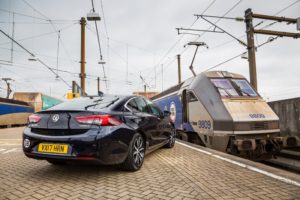 The Channel Tunnel is no less impressive more than two decades after its first crossings.

The chime of OnStar’s dialtone and our request for a decent vantage point, made from a petrol forecourt near Folkestone, had seemed so much more distant than the previous morning. It’s easy to overlook, with the huge choice of brands, segments and technologies luring drivers elsewhere, just how good the core fleet nameplates have become in the meantime. Effortless long-distance cars, technology‐rich and safer than ever, but also aiming for much higher benchmarks of quality, driveability and design. The new Insignia – the ‘Grand Sport’ in hatchback guise – can’t settle for being a rational choice these days; Vauxhall wants you to want one.

Sat at the gateway to Continental Europe, with a brimmed fuel tank and a passport on hand, there’s no shortage of ways to familiarise yourself with a car like this. As reliability and efficiency have improved, the road network has developed to match. Feats of engineering, crossing borders and shrinking journey times, which could put the Insignia into its natural habitat. Getting to Sweden without a refuelling stop seemed a suitably ambitious way to find out whether that pitch for drivers’ hearts as well as minds had meant compromising elsewhere.

Time would be against us. Vauxhall had offered a three‐day window to acclimatise ourselves with the UK’s biggest‐selling ‘mainstream’ family car – just as company car drivers are offered. That’s long enough to drain a tank of fuel without going flat out, but short enough to mean hypermiling would be out of the question. It was also short enough to mean the Channel Tunnel – which even at 23 years since the first train crossed is still the longest under‐sea tunnel in the world – would be the only feasible way to get to France. A mere half‐hour under the English Channel, now with better mobile phone signal than many parts of the UK motorway network.Benelux beckons 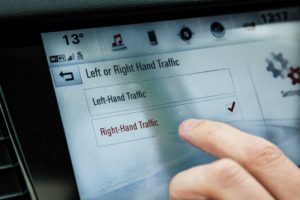 Emerging into Northern France, curiosity had uncovered a couple of the Insignia’s less obvious talents. All‐LED headlights with settings for driving on the left or the right raised hopes of not squinting at a narrow beam of light on otherwise unlit German autobahns, and we’d switched to an analogue, metric speedometer before rolling off the train. By the time we’d joined the French motorway network, photographer Andy had signed onto the onboard WiFi and was making lag‐free video calls home.

Going metric had alleviated some of the concerns we’d had back in Folkestone. The old Insignia was the longest‐range non‐hybrid in its class, with run‐in diesel versions theoretically capable of taking us to Gothenburg, a few hundred miles further into Sweden than we’d be aiming for. Its replacement has a smaller fuel tank, and our car had barely had number plates for 24 hours when it arrived in France, which would put better‐than‐brochure fuel efficiency out of reach. But, with 61 litres of diesel and a 1,100km (700mile) journey, simple maths dictated we only needed to average 6.0l/100km (47mpg) to get there – an easy target.Premium challenger 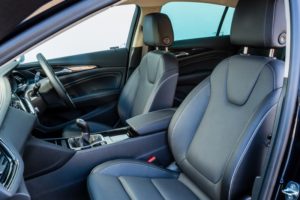 Belgian traffic had other ideas. Minutes after our first coffee stop, the traffic ground to a halt just outside Antwerp. Amid the stonyfaced commuters, two men in a white Nurburgring‐edition Astra VXR started craning necks from the outside lane as we crawled along, and it dawned on us that it was the first time we’ve been conscious of turning heads. That’s not to say it’s not a handsome car – though the Sport Tourer is probably the better‐looking bodystyle – but perhaps because there’s something familiar about it, despite the radical change between generations.

It’s a reflection of the traditional Insignia customer’s shopping list. There’s no surprise to hear Vauxhall aiming for the more athletic design of the premium brands, but the Grand Sport also aimed to package Skoda Superb‐esque interior space, rather than benchmarking its nemesis, the Ford Mondeo. It’s longer, lower and wider, more coupelike, enough to need new metal presses for the crisp edges of its bodywork, as well as pyrotechnics to lift the low bonnet and protect pedestrians. Vauxhall has no illusions of it turning this segment around, but it’s hoping drivers take a second look. The trouble is, a hint of Audi is a mixed blessing, as there are plenty of them around.

I don’t think it matters. Sat lower in the car, wrapped in a dashboard that’s struck just the right balance between actual buttons and relocating features to the touchscreen, it’s clear how much effort has been put into bundling technology intuitively. Around 80% of UK cars will have sat nav, the rest will have a frameless touchscreen with Apple CarPlay and Android Auto built in – and digital maps are part of that software. Those maps are also a useful second opinion when the factory‐fitted navigation misses a traffic jam ahead.Tech savvy 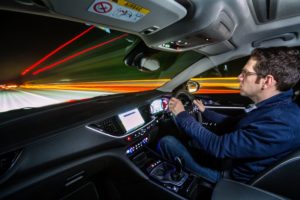 Matrix LED headlights: once you’ve tried them, you won’t want anything else.

We’d run out of daylight by the time we’d passed through the Netherlands and arrived at the first service station inside Germany. Regardless of reduced weight and drag, an hour and a half of stopstart driving in Belgian gridlock had taken its toll on our projected range. The need to preserve our remaining fuel meant derestricted autobahns wouldn’t provide an opportunity to make up time – but we could at least tuck into some currywurst and a strong coffee to make the last few hours of driving easier.

Bremen was our target for the night, and we weren’t the only ones taking advantage of the quieter roads. On unlit stretches, the Insignia’s Matrix LED headlights, capable of dipping any number of their 32 individual sections, simultaneously uplit signs and gantries while creating dark spots to avoid blinding drivers of slow‐moving lorries, opposing traffic and the occasional 150mph executive saloon overtaking us. Clever technology with a real safety benefit – and just as effective as systems offered on premium‐brand models.

Though we’d been denied a chance for high‐speed driving, OnStar at least meant we didn’t have to pull over to make hotel arrangements. Insignia drivers with OnStar on board can book parking and accommodation through the service button, and, because it’s a human being on the end of the line, it’s also incredibly specific. Our advisor found and booked us a budget hotel, with parking, close to an autobahn junction in Bremen so we could re‐join the route easily the next day – a process only hamstrung by the need to either remember your credit card number, or have a passenger on hand to read it out. Otherwise you’ll need to pull over, which defeats the point.Greener travel 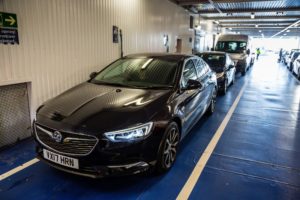 No electric option for the Insignia, yet, but the Germany to Denmark ferries are hybrids.

Germany offered up another 150 miles of uneventful driving on the second day. Fuel economy had taken a turn for the better on the autobahn, but we’d opted to take some time away from the wheel for the crossing into Denmark – an 12‐mile ferry ride from a small terminal in Puttgarden, lined up alongside Danish and Swedish cars, creaking with the weight of crates of low‐tax German alcohol.

For all the demonisation of diesel engines over the last 18 months, ferry operator Scandilines is showing there’s still some potential. The eventual aim for its ferries is to go fully electric, and that’s already underway with hybridisation beginning back in 2013. Swapping one of the two diesel engines for a 50‐tonne battery pack and using the other as a generator is said to cut CO2 emissions by 15%, while 90% of sulphur and particulate emissions are ‘scrubbed’ from the exhaust fumes using water vapour, and stored in an on‐board sludge tank to be processed later. Eerily silent and vibration‐free, it’s a reminder that cars aren’t the only polluters coming under scrutiny lately.

The Insignia has no form of electrification, but it’s a sign of changing times. The 2.0‐litre diesels use AdBlue to break harmful NOx into water vapour and nitrogen – a genuinely effective route to cleaner diesel engines, despite the bad press – and Vauxhall is one of the first manufacturers to release fuel economy data based on the new test regime. Good news in that it gives a better reflection of what you can expect on the road, but the apparent generation‐to‐generation hike in CO2 emissions might take some explaining. Or at least it will for those who still want it – even in this diesel‐weighted part of the market, there are British fleets wanting petrol Insignias.The home straight 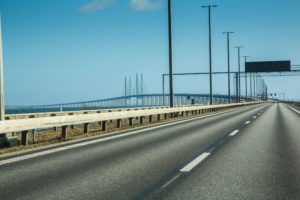 Crossing the Øresund Bridge into Sweden, the seventh and final country of the trip.

Signs for Sweden started appearing as we crossed Denmark’s elegantly simple bridges on the run to Copenhagen, a reminder that we were a long way from home. Several hundred miles is enough to appreciate ache‐free seating positions, to get used to that familiar firm German ride quality, and to learn to avoid the bit of the rev range just under 2,000rpm where the exhaust booms slightly while cruising. But it’s also long enough for your hand not to be able to reach for the gearstick without also noticing the not‐quite‐smooth edge around its chrome trim. Frustrating, as it’s otherwise hard to fault.

The Oresund straight was our final crossing – and easily the most dramatic. A two and a half‐mile tunnel, rising out of a man‐made island onto an five‐mile road and rail bridge into Malmo – the duo designed around the complications of being close to Copenhagen airport traffic and crossing a busy shipping route. It had also taken the Insignia into its seventh country, and onto its first fuel stop since leaving the UK. At 57.9mpg, there was enough fuel in the tank to take us on towards Gothenburg, had it not been for the need to get the car back to Luton the following day.

So, with a brimmed tank and some now‐familiar large‐scale engineering feats ahead of us, OnStar chimed into life once again and the navigation plotted a route back to Griffin House. There are, of course, many reasons to look outside the traditional large family car segment. But, with the new Insignia Grand Sport, the squeezed middle‐ground has never put up a better fight.

Efficiency – all of the engines are optimised for ‘real-world’ usage, said to be between 3% and 10% more efficient than their predecessors.

IntelliLux headlights – 32 LED segments, each of which can dip independently to avoid dazzling other road-users. 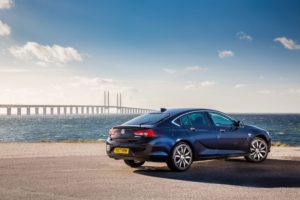 Don’t miss your exclusive first drive opportunity of the Vauxhall Insignia Grand Sport at the Fleet Show, held at Silverstone on the 10th May. Secure your place at the event by registering at www.thefleetshow.co.uk.For the latest industry news Click Here