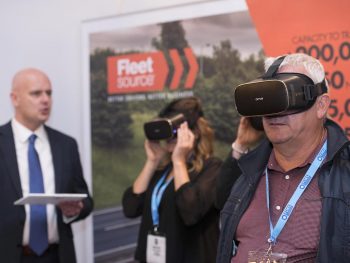 The business has already invested heavily in the very latest VR solutions, and these have now been incorporated into several of its training programmes including its new Safe UK Driving course, which covers all aspect of road driving in the UK, from rural and motorway to urban. The business has also developed virtual reality for its award-winning TRIP (Terrorism Risk Incident Prevention) course and its Safe Green & Efficient Module 6: Fuel Efficiency, Emissions & Air Quality.

CEO Nick Caesari said: “VR can be transformative as a training tool, as drivers are totally immersed in real life situations with no distractions.  The technology enables us to create more engaging and interactive content to test drivers’ theoretical knowledge, response and reaction times. Instead of drivers being told about a process after an incident, they are fully immersed in the scenario, within the safety of a controlled environment.”

Fleet Source says it’s now set to become the largest independent VR driver training provider in the UK, with VR to represent up to 30% of a standard 3.5-hour module in CPC.

Caesari continued: “CPC has been with us for 10 years and commercial drivers deserve a break from the PowerPoint lecture! VR presents a huge opportunity for radical change in driver training, which is both cost effective and truly engaging and we intend to ensure that fleet operators are able to fully embrace that opportunity.”

Find out more about the Fleet Source’s VR-based training solutions at stand B0 at the Great British Fleet Event this Thursday 30 January 2020.