Volvo’s Drive Me autonomous driving project has get underway with the production of the first car for the trial. 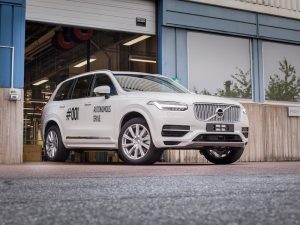 The autonomous Volvo XC90 SUV was product at Volvo Cars’ special manufacturing facility in Torslanda, and is the first in a series of autonomous cars that will eventually be handed to real families in Gothenburg to be driven on public roads.

“This is an important milestone for the Drive Me project,” said Erik Coelingh, Senior Technical Leader Active Safety at Volvo Cars, as he observed the final touches being put to the car. “Customers look at their cars differently than us engineers, so we are looking forward to learn how they use these cars in their daily lives and what feedback they will give us.”

The Drive Me pilot project in Gothenburg is the first in a number of planned public trials with autonomous driving Volvo cars. A similar project to the one in Gothenburg will be launched in London next year, while Volvo is also assessing bids from interested cities in China to launch a Drive Me project there within the next few years.

The launch of the project comes as Volvo teams up with automotive supplier Autoliv to develop next-generation autonomous driving software. It has also launched a new partnership with ride-sharing company Uber to jointly develop the next generation of autonomous driving cars.