Honda has outlined its ‘Electric Vision’ for Europe, with the aim of having electrified powertrains in two-thirds of European cars sold by 2025. 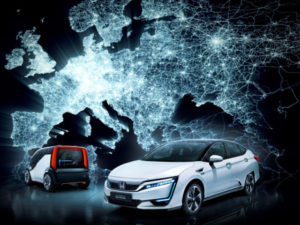 Honda aims to have electrified powertrains in two-thirds of European cars sold by 2025.

Speaking at the Geneva Motor Show as the brand showcased its Clarity Fuel Cell model, Honda Motor Europe’s president and COO, Katsushi Inoue said: “We will leverage Honda’s global R&D resources to accelerate the introduction of a full portfolio of advanced, electrified powertrains for the European customer.”

The plans will be spearheaded by a roll-out of hybrid technology across its car range. The first new hybrid model, which will feature Honda’s two-motor hybrid system, will go on sale in 2018.

Honda will also make plug-in hybrid, battery electric and hydrogen fuel cell vehicles commercially available to European customers and announced last month that it is to partner with GM on mass producing advanced hydrogen fuel cell systems in the US from 2020.