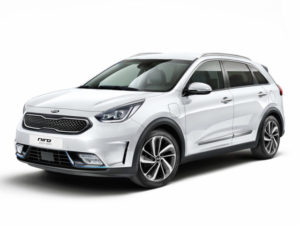 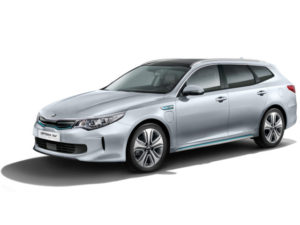 Making their debuts at the Geneva show, the Niro and Optima Sportswagon Plug-in Hybrids are scheduled to go on sale in Europe this summer.

The Niro crossover version features a 1.6-litre petrol engine paired to a 8.9kWh battery pack – while type approval tests have yet to take place, Kia’s engineers are targeting sub-30g/km CO2 emissions and a range of more than 34 miles when driven in pure electric mode. If the estimates prove correct, the Niro Plug-in will offer significant company car tax breaks as it will qualify for the lowest BIK bandings for the next two years – 9% in the 2017/18 tax year and 13% in 2018/19.

As well as offering improved economy and reduced emissions, Kia claims the addition of a plug-in hybrid powertrain has had ‘minimal impact’ on the car’s packaging – installing the battery pack under the boot floor and rear seats has left the cabin unchanged.

Technical features of the powertrain include regenerative braking technology to harvest energy and recharge the batteries while coasting or braking, and an Eco Driving Assistant which offers coaching on how to drive in the most efficient manner.

Unusually for a vehicle such as this, Kia will offer the Niro with a towing pack option, giving the ability to tow braked trailers up to 1,300kg.

The second new plug-in hybrid comes in the shape of the Optima Sportswagon, joining the saloon version which is already on sale. Due to arrive in showrooms in the third quarter of 2017, this larger plug-in model pairs a 2.0-litre petrol engine with a 50kW electric motor and 11.26kWh battery pack.

With a combined 205PS, the Optima is claimed to deliver a pure electric range of more than 37 miles and claimed 34g/km CO2 emissions (echoing the BIK performance of the Niro).

For more of highlights from Geneva Motor Show, click here.