Testing Times: The impacts of WLTP testing on the used car market

By Natalie Middleton / 2 years ago / Comment, Opinions / No Comments 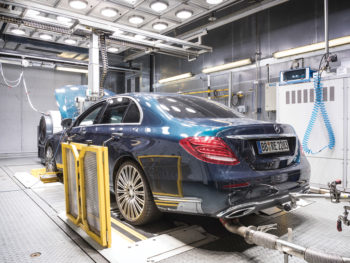 The Worldwide harmonised Light Vehicles Test Procedure (WLTP) cycle has finally kicked in for all new cars, with September marking the deadline for re-testing. It’s disrupted orders, raised CO2 and tax and left some models unavailable, but could it also impact the used market?

DfT derogation rules mean carmakers can only sell up to 2,000 (or 10% of 2017’s sales volume) pre-1 June build vehicles after September. In turn, it’s raised concerns that large numbers of in-stock cars might do not meet the new regulations, with potential to increase pre-registrations and bumper discounts as they are pushed through to market.

According to industry expert Dean Bowkett, such tactical registrations could account for the 1.2% rise in new car registrations seen in July after the 6.3% fall in the first half of the year – and he says the ramifications could be felt for some time.

“A number of daily rental clients are seeing the value of young used diesel models falling as they are competing against these tactical, zero-mile vehicles,” he says. “When demand for young used falls then so do the prices, and reports are coming in that this is happening across Europe and in the UK.

“As the price of younger used vehicles fall then we will start to see a cascade into older models. How far and how sustained this will be depends upon just how much more stock OEMs and dealers need to shift in August and what happens from 1 September onwards.”

Cazana’s Rupert Pontin has also warned of near-future problems from pre-registrations, adding: “To move these cars to the retail consumer will take some strategic pricing which may push older cars down in price. It will be very interesting to see what the retail consumer appetite is like.”

But there could be other issues to mitigate this. According to Derren Martin, head of current valuations at Cap HPI, although volumes of pre-registrations have risen slightly through August, they are at a very similar point to where they were at the same time last year. He also points to the industry consensus that fleets are likely to delay replacing vehicles due to concerns over increased tax costs, which could lead to lower supply in the used market, countering the rise in pre-registrations.

Martin Potter, Aston Barclay’s group operations director, agrees that fleet concerns over current and future WLTP-tested cars is leading to delays on ordering new models, which could mean restricted supplies of ex-fleet stock coming into the market during September, October and November. He said this would actually see prices rise from an already strong position.

And Philip Nothard, Board Member of the Vehicle Remarketing Association (VRA), has pointed out that the issue with supply of WLTP-tested vehicles needs to be taken into consideration.

“For the sector, [there have been] reports recently that the challenges relating to supply in the retailer dealer market, creating concern for the levels of retail part-exchanges in September as order banks slow – which could cause increased demand in the wholesale sector from dealers as they look to replenish stock levels.”

It’s a point echoed by Glass’s, which says that although residual values of nearly new cars will be affected through pre-registration activity, the impact on 12-month values may be limited if new car supply is disrupted.

Chief editor Jayson Whittington says the pre-registration impact on residual values could reduce with the anticipated interruption to new car supply and delays in registering cars until they gain WLTP type approval. “It could be the case that following production disruption due to WLTP, there could be issues with supply leading to increased demand for pre-registered cars,” he comments.