Switch to autonomous vehicles to increase traffic jams along way

Urban congestion will get worse before it gets better under the switch to autonomous vehicles. 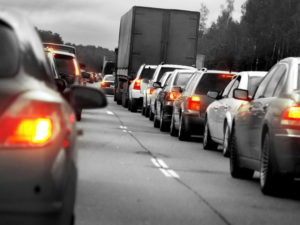 That’s according to research from Arthur D Little that will ignite the ongoing debate about the benefits of autonomous vehicles.

Although some experts say the advent of autonomous driving will decrease traffic jams due to safer driving, better braking practices and the elimination of accidents due to driver error,  there has also been conjecture about the possibility of increased congestion due to more sole-occupant journeys – with drivers switching away from public transport – and zero-occupant journeys from autonomous vehicles being used to run errands or carry out deliveries.

The research from Arthur D Little adds to the debate by indicating that 100% deployment of autonomous vehicles with adapted traffic rules significantly reduces urban congestion by a factor of 10, but that mixing human and robot drivers together will increase traffic jams by over 16%.

The micro-simulation – intended to provide a starting point for further research and wider discussion – was based on a major intersection in Frankfurt am Main, Germany, notorious for its evening traffic jams. This five-lane highway includes two lanes turning left and one to the right, has an 80kph (50mph) speed limit, and is controlled by a traffic light.

The simulation indicated that an equal mix of human and autonomous drivers increases congestion compared to just human drivers. This is mainly due to autonomous vehicles fully obeying the law and not taking risks when moving between lanes, unlike real-world human drivers.

However, the number of vehicles passing through the light increases more than tenfold when switching to 100% autonomous vehicles and adopting optimised traffic rules, including reduced 2.5m distances between cars, allowing platooning, and a higher 90kph (56mph) speed limit. This is feasible given that autonomous vehicles can react faster than human drivers to changing situations, avoiding sudden, hard braking and reducing accidents.

Dr Klaus Schmitz, partner at Arthur D Little, said: “Higher demand for mobility and greater urbanisation are making congestion a growing issue within the world’s cities. Our micro-simulation found that while fully autonomous vehicles would solve this problem, the initial scenario we are likely to see, with a mix of robot and human drivers, actually leads to greater traffic jams. Things would get worse before they get better. Clearly switching to 100% autonomous vehicles and changing traffic rules would require radical, disruptive action, posing serious questions for cities and society.”

Previous: Kia and Hyundai to introduce solar-charging tech
Next: Testing Times: The impacts of WLTP testing on the used car market