SsangYong Motors UK has been awarded a contract to supply 32 vehicles to Highways England, to be deployed initially in Highways England areas in the north west (area 10), the south east (area 3) and the midlands (area 9). 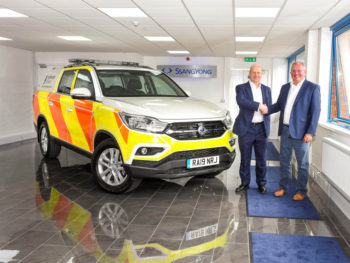 Highways England has recently brought responsibility for asset inventory and operational decision making in-house, thus directly managing routine maintenance and the delivery of capital renewal and improvement schemes, rather than contracting the responsibility to a third party.

To help with the operation, 32 Highways England SsangYong Musso have been specifically modified by Babcock International, based in Walsall, near Birmingham. The modified Musso’s are fitted with hi-vis orange and yellow livery, 360-degree lighting including a roof mounted lightbar, and are compliant with “R65 Lighting & Chapter 8” legislation.

The Musso were chosen for their 4×4 capability, large payload, and the required towing capability.

Nick Laird, managing director of SsangYong Motors UK, said: “Our business introduced a fleet strategy 12-months ago with a focus on public sector, utilities and operational fleets – it’s an area which, with our product line-up and company structure, we can compete successfully, offer flexibility, and really add value.”