The UK new car market declined again in July, with 157,198 vehicles leaving showrooms, according to figures released today by the SMMT. 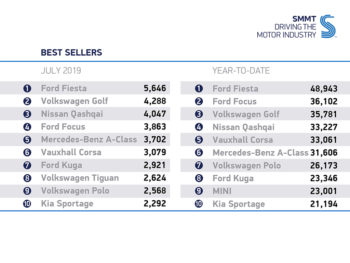 Registrations dropped 4.1%, and marked the fifth consecutive month of decline, as political and economic uncertainty, confusion and a lack of confidence took their toll.

Speaking on behalf of the National Franchised Dealers Association (NFDA), Sue Robinson, director, said, “The decline of -4.1% in new car sales in July shows that the Government must secure a Brexit deal which provides clarity to businesses and consumers.”

All sectors observed decline, including for fleet and business customers that reduced by -4.7% and -22.5% respectively, and private demand waned -2.0%.

James Fairclough, CEO of AA Cars, commented: “The overall decline in new registrations is due to a uniquely diverse set of pressures on the new car market, one of which is the UK’s acute political uncertainty. The lack of clarity about Britain’s future – both economic and political – is prompting some would-be car buyers to hold back.

“These deferred purchases, coupled with businesses holding onto their fleet vehicles for longer due to uncertainty around WLTP and company car taxation, continue to impact the market.”

Michael Woodward, UK automotive lead, Deloitte, said: “Whilst there are a number of factors impacting the latest sales figures, uncertainty surrounding Brexit is impacting both fleet and business sales. Deloitte’s latest CFO survey revealed businesses are pausing investment, and the decline in business sales is part of this wider trend.”

All segments experienced declines in the month, expect luxury saloons and specialist sportscars, with the biggest falls seen in executive (-21.6%) and supermini (-12.1%) segments.

Registrations of diesel vehicles fell for the 28th month, down -22.1%, while petrol remained stable, with 2,646 more registrations than in July 2018.

Despite the declines in overall sales, the big winners continue to be alternative fuel vehicles – Hybrid electric cars increased by 34.2%, with 7,758 sales, and although plug-in hybrid electric vehicles continued their recent decline, down -49.6%, this looks to be largely due to a lack of availability. Demand for battery electric vehicles also shot up by 158.1%, resulting in a 1.4% market share, the highest monthly market share on record.

Manufacturers have invested heavily in a growing range of powertrain options, with British drivers now having the choice of advanced low emission petrols and diesels, and an ever-greater number of hybrid, plug-in hybrid, battery electric and even hydrogen cars.

Following significant investment in low-carbon technology and a range of powertrains, the SMMT says there are now 350 models available to UK buyers – around 80 of them alternatively fuelled, including 21 battery electric, with more expected to arrive in showrooms later this year.

SMMT forecasts this ongoing investment into new, ever more advanced powertrain technology will result in battery electric vehicles doubling their market share next year, with 51,000 registrations in 2020, representing 2.2% of the overall market.

Mike Hawes, SMMT chief executive, said, “Despite yet another month of decline in the new car market, it’s encouraging to see substantial growth in zero emission vehicles. Thanks to manufacturers’ investment in these new technologies over many years, these cars are coming to market in greater numbers than ever before. If the UK is to meet its environmental ambitions, however, government must create the right conditions to drive uptake, including long-term incentives and investment in infrastructure. The fastest way to address air quality concerns is through fleet renewal so buyers need to be given the confidence to invest in the new, cleaner vehicles that best suit their driving needs, regardless of how they are powered.”

Jon Lawes, managing director, Hitachi Capital Vehicle Solutions reacted, “Despite another challenging month for the UK car industry, a 70.6% year-to-date increase in battery electric registrations and its highest market share to date is encouraging for the future state of the market.”