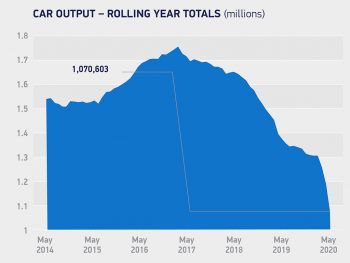 Just just 5,314 vehicles were built in the UK in May despite automotive plants starting to get back up and running

The output was a slight improvement on April, when only 197 units were built, but with factories still closed or running at reduced capacity it still marked the worst May since 1946, the SMMT said.

Reduced demand and the implementation of social distancing measures were chief amongst the reasons for output to be held back despite around two thirds of the UK’s automotive plants getting back up and running during the month.

4,260 cars were exported in May with most headed to the EU, the US and China – just 1,054 were built for the domestic market, with English car showrooms not reopened until 1 June.

Andrew Burn, partner and UK head of automotive at KPMG said, “What is telling from the results is that demand in key overseas markets will determine the speed at which car manufacturing will return to ‘normal levels’, given 4 out of 5 cars produced are exported.”

In the first five months, UK factories produced 324,763 cars, representing a decline of -41.7% on the same period in 2019 and a loss of more than 230,000 units, with the full year outlook now expected to be fewer than one million units.

Earlier this week, the SMMT warned that potentially up to one in six automotive jobs are at risk of redundancy when the furlough scheme comes to an end.

Mike Hawes, SMMT chief executive, said, “May’s figures are yet more evidence of why the UK industry, like its global rivals, needs dedicated support to drive a successful restart. Government assistance so far has been vital in keeping many businesses afloat, but the job isn’t done. Measures to boost cash flow, including additional and tailored finance schemes, tax relief and business rates deferral would deliver immediate results when liquidity is most acute. We have to retain the highly skilled jobs the sector provides but also ensure the business conditions are competitive so we can unlock the investment that will drive long-term recovery – a green recovery – which is inextricably linked the sector’s success.”

Peter Barnes, head of automotive at legal business firm DWF, added, “Given that the UK automotive sector is fundamentally stable with a skill set admired globally, the unprecedented vital government assistance which has been provided to keep many businesses afloat needs to go further as has been seen in actions taken by governments in France and Germany in response to their own manufacturing industries. To this end, there remains hope that a car scrappage scheme enticing those with older vehicles back to car showrooms combined with a cut in VAT could make all the difference.”

Burn added, “As restrictions continue to be eased, the auto industry, like everyone else, will be hoping that there won’t be a second wave of COVID-19, which could knock consumer confidence at a time when it is very much needed to return quickly.

“Another critical element of this is seeing how the supply chains, at all tiers, cope as volumes return, given many are likely to be struggling for working capital and could be operating at sub-optimal production levels. However, we do expect an increase in the number of companies going into insolvency in the automotive supply chain over the coming months. So, it remains to be seen how much disruption this may cause and the commercial impact of the proposed changes to the insolvency rules in the UK.”

The SMMT also voiced concerns over a compound effect caused by a no-deal Brexit, but today’s figures are released at the same time that the SMMT welcomes government’s commitment to ‘turbocharge’ negotiations to secure a comprehensive free trade agreement with the EU by the end of the year.

Under a comprehensive free trade agreement with the EU, full recovery would be possible, Barnes comment, “While the world has quite correctly been focused on the impact of the pandemic, which has consumed every inch of capability and capacity in the automotive market, the issues which would be created by a hard Brexit in the automotive sector remain extremely real in these unprecedented times. For this reason, the confirmation that the government will turbocharge its negotiations with the EU is welcomed, and it is hoped that the results of such negotiations will secure a comprehensive free trade agreement with the EU that maintains tariff and quota-free trade. In such a scenario, a full recovery is possible within five years resulting in output reaching pre-crisis levels of 1.35million units by 2025.”