One in six auto industry jobs at risk, says SMMT

The impact of COVID-19 on the UK automotive sector could lead to one in six job losses, warns industry body the SMMT, unless government implements a dedicated restart package. 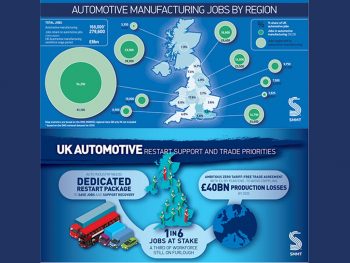 A perfect storm of COVID-19 and the prospects of a no-deal Brexit could damage the automotive industry irreparably, the SMMT has warned, with potential job losses ammounting to thousands and billions of pounds of lost revenue for the economy.

A Society of Motor Manufacturers and Traders (SMMT) member survey – which received 290 responses, representing £77bn annual turnover and nearly 150,000 employees – has revealed that a third of automotive workers are still furloughed, but with the government’s job retention scheme coming to an end at the start of November, there is a critical need for a dedicated restart support package from government to safeguard automotive jobs and the UK autmotive industry.

The SMMT says that a support package for the sector would both help drive demand and ease cash flow problems relating from industry-wide COVID-19 shutdowns. Emergency funding, permanent short-time working, business rate holidays, VAT cuts and policies that boost consumer confidence to accelerate a sustainable restart for the market and manufacturing are all suggested by the SMMT to solve the growing problem.

Speaking today at the industry’s annual Summit, Mike Hawes, SMMT chief executive, said, “Prolonged shutdown has squeezed liquidity and the pressures are becoming more acute as expenditure resumes before invoices are paid. A third of our workforce remains furloughed, and we want those staff coming back to work, not into redundancy.

“Government’s intervention has been unprecedented, but the job isn’t done yet. Just as we have seen in other countries, we need a package of support to restart; to build demand, volumes and growth, and keep the UK at the forefront of the global automotive industry to drive long-term investment, innovation and economic growth. Support delivered now is an investment in the future of one of Britain’s most valuable assets… investment that we will repay many times over.”

More than 6,000 UK automotive job cuts have already been announced in June, a result of global lockdowns, closed markets and shuttered plants. A further 10,000 job losses were announced for BMW contract workers in Germany, highlighting the potential risk to UK jobs in future. Showrooms in England and Wales are now re-opening and production lines restarting, but reduced demand and social distancing are slowing productivity, the SMMT added.

Brexit is another influencing factor that only compounds the issue. The SMMT said that the prospect of a ‘bare bones’ or no-deal Brexit would amplify the situation. Consequently, the SMMT is calling on government to provide certainty of a zero-tariff trade deal with Europe and to do so quickly so that there is time to prepare, with companies including Nissan indicating that it would be forced to look at long term prospects and not take unecessary risk regarding the retention of its factory in Sunderland. Furthermore, a ‘no deal’ scenario could see UK manufacturing volumes fall below 850,000 by 2025 – the lowest level since 1953, the SMMT warns in its second annual trade report for 2020, “UK Automotive Trade in a post-Covid World“.

Mike Hawes said, “COVID-19 has consumed every inch of capability and capacity and the industry has not the resource, the time nor the clarity to prepare for a further shock of a hard Brexit. That’s why we do need to ‘turbo charge’ the negotiations to secure a comprehensive free trade agreement with the EU that maintains tariff and quota free trade. With such a deal, a strong recovery is possible, we can safeguard the industry and our reputation as an attractive destination for foreign investment and a major trade player.”

Critically, the combination of COVID-19 and a no-deal Brexit would mean a £73.5bn cut in revenues, due to production losses over the period to 2025. The SMMT therefore is urging government to rescue the industry while also taking into account the billions it provides to the economy. In 2019, the UK automotive sector did more than £100bn in trade, including around £42bn in exports.

Previous: Comment: What is the main challenge for fleet operators?
Next: Jaguar I-Pace updated with new three-phase charging