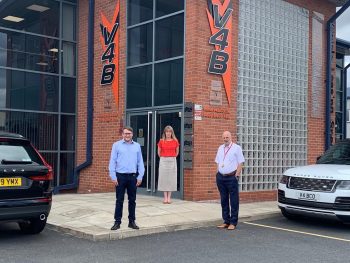 Jason Reynolds has been appointed managing director at V4B

Jason’s appointment by V4B – a 30-year old vehicle leasing brokerage based in North Wales – came as a result of its owner and director, Richard Boreham, wishing to capitalise on market changes and recognising Reynold’s track record in making that happen.

While V4B is focused on changes within the industry, Jason’s experience was recognised as being invaluable for the business’s growth.

He began his career at the age of 17 at a Ford Dealership in Wilmslow locating stock deals for the business. Shortly after, he joined the leasing industry with Nationwide Vehicle Contracts before moving to Central Contracts of Stoke where he helped expand the company’s sales.

Richard Boreham, owner and director of V4B Group said, “A virtual handshake later, Jason has already begun his time with the V4B Group and has started implementing huge changes that the business is already capitalising on.”

Jason stated, “The SME and Consumer markets are so important in this industry and I’m so excited to now be a part of V4B and its journey. It’s eye-opening to be working in a business that adopts the same values as I have, and I am excited for the new challenge. I’m quickly embedding my values to the V4B Group – eat, sleep, lease, repeat!”

Please note. Errors were acknowledged in the first release of this story, but have since been amended. We wish Jason Reynolds the best of luck in his new position.