By Colin Tourick / 2 years ago / Comment, Features / No Comments

Given the potential financial benefits of driver training, Professor Colin Tourick wonders why it isn’t more common for fleets to offer it to employees. 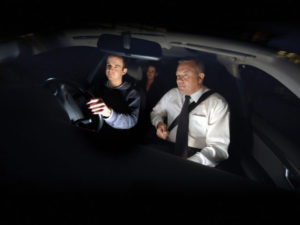 “1,800 people die annually on Britain’s roads, about a third of whom are business drivers, and driving for work is by far the most dangerous work-related activity.”

“Could any fleet manager ignore the opportunity to make a small investment that could return 16 times that amount, improve legal compliance and reduce the chance of accidents?”

It was a good question, and none of the 150+ fleet managers in the room could disagree with the proposition.

The occasion was the annual conference of the Institute of Car Fleet Management and the speaker who posed the question was Tony Greenidge of IAM RoadSmart. As both organisations are registered charities that do good work for the sector, I’ve no problem giving them a name-check here.

The ICFM has been around for 25 years. Its mission is to promote excellence in vehicle fleet management practices, deliver top-notch fleet education programmes and enhance fleet managers’ personal development and career prospects.

IAM RoadSmart has spent more than 60 years making our roads safer by improving driver skills. It has a team of qualified experts, thousands of volunteers and runs 200 local groups. For the sake of balance I must point out that other suppliers can deliver similar services. (See https://goo.gl/mPEUyk) Tony’s presentation put numbers around driver behaviour.

He reminded us that 1,800 people die annually on Britain’s roads, about a third of whom are business drivers, and driving for work is by far the most dangerous work-related activity. (Only 144 people die at work for non-driving related reasons).

A decade of austerity has led to a 30% reduction in the number of police traffic officers. Fewer drivers are being stopped or convicted of road offences. Might this make other drivers – including business drivers – less bothered about whether they speed or carry out other traffic offences? Quite possibly, given that 13% of breath tests are positive, up from 11% over seven years (UK Government 2010-2016 stats). And we also need to consider the use of mobile phones whilst driving, which reduces reaction times much more than being over the drink-drive limit, even when the phone isn’t hand-held.

He assumed a fleet of 80 cars and 20 vans, averaging 15,000 business miles per annum, having a 15% chance of an at-fault collision every year and a four-year replacement cycle. A fairly typical medium-size fleet.

He presented well-sourced stats that showed that 37% of leased cars and 40% of leased vans are returned with unfair wear and tear, for which the leasing companies charge an average £308 and £414 respectively. That’s a cost of £3,107 for our example fleet, a fair chunk of which might be down to driver behaviour.

The average motor insurance claim is £2,839 (Source: ABI, 2017), and this figure is rising as cars become more complex. If 15% of our assumed fleet is involved in an at-fault collision every year, the cost to the fleet will be £42,585. How much of that could be reduced by changes in driver behaviour? Presumably rather a lot, as these are at-fault claims.

Last September we saw the introduction of the new Worldwide Harmonised Light Vehicle Test Procedure (WLTP) which replaced the New European Driving Cycle (NEDC). Both systems were designed to assess vehicle emissions and fuel economy. WLTP is more extensive than NEDC. The test cars are driven for longer and further, at higher average and maximum speeds and in a wider range of conditions. The upshot is that manufacturers’ published mpg figures under WLTP are significantly lower than under NEDC, and likely to be much closer to the actual mpg you can expect from the car. One key variable that will make the difference between WLTP and the actual mpg is – yes, you got it – the driver’s behaviour. If they drive in a fuel-efficient way they will use less fuel and generate less pollution.

The Energy Saving Trust (EST) is another not-for-profit organisation we should mention here. It has helped many fleet managers reduce fleet costs and emissions, and calls fuel-efficient driving ‘ecodriving’, claiming that it can reduce fuel consumption by up to 15%. Tony assumed that his fleet of 100 vehicles driving 15,000 miles per annum had an average 44mpg under WLTP, but that the fleet actually averaged 40mpg. He showed that a cost saving of £18,908 was achievable if the driver could be encouraged to drive in a fuel-efficient way.

Then we came to the interesting part, which I hadn’t been aware of. The EST provides a subsidy to approved training organisations for every driver they put through an ecodriving course. (See https://goo.gl/wD5Q36) This can reduce the per-head cost of a standard 90-minute course to £30-£40, depending on the provider.

All good fleet managers are already doing all of the basic things necessary for the efficient operation of their business and grey fleets. This includes checking drivers’ licences; regularly re-checking these and getting drivers to regularly read and sign the health & safety policy and a health declaration; carrying out a risk assessment covering key areas of knowledge, skill and behaviour; and putting their drivers through online e-learning courses to remind them of the risks of driving and how these can be mitigated. (I know you are already doing all of this so I’ll skip on to the next topic).

The business case for going to the next step – and putting all drivers through an ecodriving course – is unbelievably compelling.

Costs reduced, emissions reduced, accidents avoided, lives saved, all for £40 per head and 90 minutes outside the business. Why isn’t everyone doing this?