SEAT’s facelifted Leon will introduce new engines plus a raft of connectivity and driver assistance technologies and a new top-spec trim level when it launches early next year. 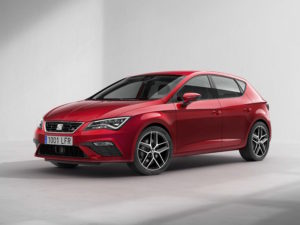 A raft of additions across the 2017 Leon range brings new engines, connectivity technologies and an array of assistance systems

Inside, the Leon now offers an LED ambient lighting scheme plus a new centre console with electric park brake and an eight-inch screen with less switchgear than the current model.

However the main focus is on the latest in driver assistance and connectivity technology – many inherited from the new Ateca SUV. These include a Connectivity Box in the central console that enables wireless smartphone charging while the Leon also offers the latest generation of Easy Connect infotainment systems, SEAT Full Link and the SEAT ConnectApp that comes with voice recognition and gesture control technology.

Driver assistance systems are also carried over from the Ateca and include Traffic Jam Assist that can be used to manoeuvre, accelerate and brake the Leon automatically in traffic jams up to 37mph. Further new features include the Pedestrian Protection System which recognises vehicles as well as pedestrians, Traffic Sign Recognition, Blind Spot Detection, plus parking assist technology, Emergency Assist and High Beam Assist.

New engines include a 1.6-litre diesel and 1.0-litre three-cylinder TSI, both with 113bhp. No fuel economy or emissions figures have been announced and full range pricing and specification will be released closer to the launch.

The new Leon launches in UK showrooms in February 2017.