The Scottish Government has published a new Road Safety Framework, setting out a clear strategy for improvements and backed by a ‘Safe System’ approach and work with partners. 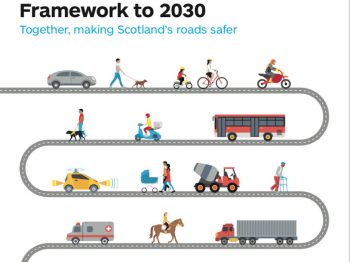 The framework – which includes a focus on work-related road safety – sets out a vision for Scotland to have the best road safety performance in the world by 2030 and an ambitious long-term goal where no one is seriously injured or killed on its roads by 2050.

On the route to the 2050 goal, the framework sets out interim targets to 2030, based on a 2014-18 baseline and including a 50% reduction in people killed and those seriously injured, along with a 60% reduction in these areas for children under 16.

The framework also targets an improvement in the number of motorists involved in accidents while driving for work. Health and Safety Executive (HSE) figures highlight that, in 2018-19, driving accounted for 18 of the 29 work-related deaths in Scotland, making driving the most dangerous work activity; particularly with the increase in light goods vehicles on the roads and the rise of both the grey fleet and the so-called ‘gig’ economy.

The new framework document was published by Cabinet Secretary for Transport, Infrastructure and Connectivity Michael Matheson as he also announced a £500,000 allocation to open the latest round of Road Safety Framework Funding – helping organisations take forward innovative projects to improve road safety.

The framework’s five core pillars cover: Safe Road Use, Safe Vehicles, Safe Speeds, Safe Roads and Roadsides and Post-Crash Response. To kick-start a national conversation around road safety, the launch of the framework coincides with a new national marketing campaign by the Scottish Government and Road Safety Scotland focusing on speed reduction – with the clear message that there is no excuse for speeding.

Michael Matheson said: “Deaths or serious injuries on our road network are not an inevitability. Our strong belief, shared by Scotland’s road safety partners, is that even one death on our roads is one too many.”

IAM RoadSmart, which was involved with the development of the new framework, said it fully endorsed the new road safety vision for Scotland and urged the Department for Transport to reinstate targets in England.

Neil Greig, IAM RoadSmart director of policy & research, said: “For every nation, the setting of road safety targets has been a catalyst for improvement in road deaths and injury numbers.

“Road safety organisations across the UK agree that targets work but the Department for Transport in London no longer use them. So today we have to ask the question, if Scotland can set road safety targets, why can’t England?”

But IAM RoadSmart also said it was vital that investment in road safety did not become a victim of any post-pandemic spending cuts.