The Government must take action to tackle the growing problem of drug driving, including ending the ‘postcode lottery’ of enforcement, according to a new PACTS report. 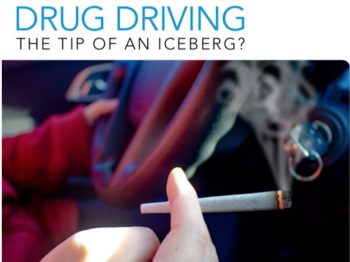 The report says the DfT should undertake a review of policy on drug driving, including looking at a combined drink and drug driving offence, increasing UK enforcement and publishing drug driving statistics

A total of 12,391 people were convicted of a drug driving offence in 2019 and the figure is rising fast.

But according to the Parliamentary Advisory Council for Transport Safety (PACTS), enforcement of the drug driving laws varies dramatically across the country.

Some police forces convict 10 times more drug drivers than others, when allowing for population size. However, some forces are rationing what should be a routine roadside test, due to the high costs and delays with blood testing – which the report says must be tackled.

It also calls for the Home Office to review the blood testing process and seek ways to reduce costs and increase the efficiency of laboratory testing – using “a Covid-style response to improving lab capacity” and potentially passing the costs on to those found guilty.

The report also highlights that reoffending is a major concern, with 44% of recorded offences being committed by reoffenders. In one case, a driver who had 18 previous drink- and drug-driving offences was caught again for ‘driving or attempting to drive with drug level above the specified limit’.

To address this, a Drug Drive Rehabilitation Course and High Risk Offender Scheme should be introduced, modelled broadly on the existing drink drive programmes, but with better screening for drug and mental health problems and with clear pathways to treatment.

The report also urges the Department for Transport to produce and publish robust offence and casualty data on drug driving using coroner data and other sources, as they do for drink driving. The authors say we still do not have answers to many of the vital questions around the impact of drug driving and the problem may be far greater than current systems show and still growing.

David Davies, executive director of PACTS, said: “This report by PACTS shows we still lack answers to vital questions on drug driving. The number of offences and deaths detected so far may be only the tip of the iceberg.

“The police have made big strides in catching drug drivers over the past five years. But it remains a postcode lottery. While some forces are testing hundreds of drivers, others are rationing patrols to a single test. These disparities cannot be explained by differences in drug driving and the danger it creates. A more consistent approach is badly needed, with all forces testing for drug driving where it is suspected. “

He added: “Driving under the influence of a combination of drink and drugs, even at relatively low levels, is particularly dangerous. This is not widely understood and there is no specific offence for drink and drug driving. This needs to change.”

The report comes some six weeks after PACTS said the UK’s system to prevent drink-driving is no longer adequate and also needs a major review – including a lower limit and improved enforcement.