The Department for Transport has set out a major package of measures to reduce the number of people killed and injured on roads, including plans for tougher seatbelt laws and the introduction of alcolocks. 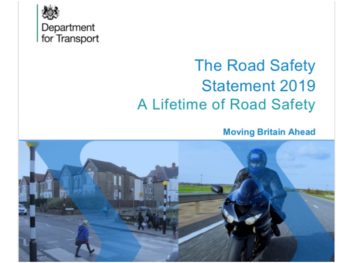 The review is intended to enhance safety for four vulnerable road user groups – young, rural and older road users along with motorcyclists

Intended in particular to enhance safety for four vulnerable road user groups – young, rural and older road users along with motorcyclists – the list of 74 measures included in the road safety plans bring a possible toughening up of the laws on the use of seatbelts in cars, as the Government says it’s the most obvious and direct way of saving lives in road crashes.

Currently, those not wearing seatbelts are given a £100 on-the-spot fine – but now the Government is considering issuing penalty points for this offence. Figures show that in 2017, 27% of car deaths involved people who were not wearing a seatbelt, an increase of 7% on the previous year and a marked increase on the years before it.

Meanwhile the Government also says it will investigate the feasibility of using alcolock devices as part of drink-drive offender rehabilitation programmes in the UK. This will explore how they can be used in combination with existing interventions, such as the drink-driver rehabilitation course and the high-risk offender scheme. The Government has also awarded £50,000 funding to PACTS to support a multi-disciplinary review of recent drink driving trends, practice and interventions in the UK.

For fleets, the document says the Government will work with commercial operators, employers’ organisations and drivers to identify and promote good practice in work related road safety, including supporting the Driving (and Riding) for Better Business. And it will work with the Health and Safety Executive to review work-related road safety and the prevention of collisions at workplaces with a rural land focus.

And in partnership with Euro NCAP, the Driving for Better Business programme, PACTS and road safety charities such as Brake, the Government will engage with private fleet buyers and leasing agencies through a series of outreach events to get them to improve the safety of the private sector fleet. This includes work to raise the profile of the Euro NCAP scheme.

A Rural Road Users Advisory Panel will also be set up to explore how to boost road safety in rural areas, particularly improving roads and traffic signs, and issues around speed limits and enforcement.

Furthermore, as announced earlier this week, the Department for Transport will undertake a review into roads policing that could see more ‘cops in cars’, reversing over a decade of cutbacks and helping to cut down on dangerous driving.

The document has been published a day after the Government revealed that it’s looking to enhance road safety for young drivers by exploring graduated driver licensing, including a possible ban on night-time driving for new drivers.

Commenting on the plan, Transport Secretary Chris Grayling said: “The UK has some of the safest roads in the world, but we are not complacent and continue to look at how we can make them safer.

“Today’s action plan is a key milestone in our road safety work and sets out the important steps we are taking to reduce the number of people killed or seriously injured on our roads.”