By Natalie Middleton / 3 years ago / Interview / No Comments

Thatcham’s head of research Matthew Avery speaks to Natalie Middleton about the importance of AEB for fleets and the need for differentiation between assisted and automated vehicles. 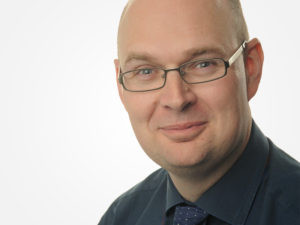 Are fleets starting to tune into the benefits of Autonomous Emergency Braking (AEB) technology?

We’re certainly seeing more buyers out there wanting to have AEB. I think the issue with fleets is that they look at the bottom line. If it’s an optional fit, it’s still a take-up of 5% on average.

New cars are starting to get AEB as standard fit but some manufacturers are pursuing different policies. We think they could put AEB on as standard because they are generally [already] putting the technology on vehicles.

How significant are the benefits for fleets of AEB? Are all AEB solutions the same?

They are very different, and some of our testing and the real-world validation has proven that. So, for instance, the earlier generation laser-based city systems, they’re low-cost and although they’re good at low speed, their performance is significantly inferior to a radar-based system, which works over a broader speed range. You can also have the Adaptive Cruise Control (ACC) functionality with it; a good comfort function that people like.

We’re getting anecdotal evidence from various fleets that those who have got AEB systems on their vehicles are seeing a significant reduction in their collision rates, but we haven’t seen fleet take-up around the camera versus radar effect. But we are seeing an effect in terms of our real-world data, which seems to show the benefit of radar systems.

There are downsides for both systems when it comes to repairs. Radars tend to be quite expensive to replace – we’re talking about a single component replacement cost of about £500. However, cameras are not without fault, because they are behind the windshield and manufacturers tend to require calibration of them, which adds to the cost of the repair. The research is still a bit inconclusive as to whether you actually need to have the camera calibrated. We’re calling for self-calibration systems.

Are there any factors coming up that will drive AEB take-up by fleets?

Yes, because we’re seeing many, many more sensors being fitted to vehicles. A good example of that is the new Audi A8, which has got 18 sensors on it, required for its autonomous operation. The proliferation of sensors to support automated driving is going to be more and more common. But I think customers are going to really like it and that may well drive the market.

Thatcham has repeatedly called for AEB to be mandated in new vehicles. Are there any other technologies you’d also like to see mandated?

One of the key things where we see huge potential benefits is with reverse autobrake systems, where the vehicle automatically brakes to avoid collision damage. And it’s also good for avoiding pedestrians when reversing.

The other thing that we’re beginning to see is manufacturers doing more and more with their sensor systems around lateral controls; i.e. steering a vehicle back into a lane. That could be a real lifesaver.

And I think one technology that we’d like to promote, but we still aren’t seeing yet, is sideways-looking sensors. These are going to potentially prevent drivers from pulling out in front of another vehicle and open up benefits for protecting motorcyclists.

Why is it so important for the industry to differentiate between assisted and autonomous driving?

Fundamentally we think there will be a real benefit with assisted driving, because having the driver in the loop and the system protecting them is probably even better than just letting the car do it itself – certainly in the near term.

We’d like clear blue water between assisted driving and automated driving – there’s a big difference between the two. And we’re calling for customer clarification where, if you’re driving a vehicle with a high level of assistance, we want to make sure the customer knows they are still responsible for keeping themselves and others around them safe.

What should fleets be doing in all this?

I think the thing they can really provide support with is educating the driver to think that they should use the technology, but be aware they are still the backstop. They shouldn’t start compromising their safety with thoughts like, “Well, it’s actually safe for me to use my mobile phone here, as the car is driving for me and I’ll just check that text message.”

I think fleets can also play a role with government, saying, “We want assisted driving, we want automated driving and we want the clear blue water between the two.”