BMW’s seventh-generation 3 Series saloon will introduce a new platform along with plug-in hybrids, enhanced driving dynamics and new technologies when it goes on sale next March. 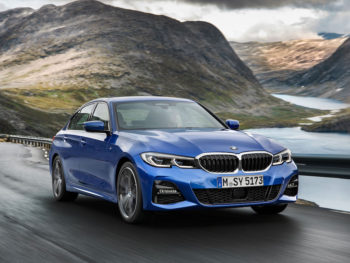 Popular with both fleet and retail buyers – it’s the most successful BMW to date – the new model marks one of the biggest unveilings at this year’s Paris Motor Show. It’s built on the same platform as the X3 and 5 Series, and is longer and wider with an extended wheelbase that brings extra cabin space while boot capacity is also up by 36 litres in real terms. It also weighs up to 55kg less than its predecessor, helped by the use of aluminium, and introduces different styling under a new design language along with an updated cabin, including a new central instrument cluster with screen size increased from 2.7 to 5.7 inches and Control Display with screen up from 6.5 to 8.8 inches.

The launch engine line-up comprises three models, all based on upgraded versions of the Efficient Dynamics four-cylinder engines. The 187bhp diesel in the 320d brings 400Nm of torque and gets a new six-speed manual as standard with the eight-speed Steptronic transmission available. Emissions start from 115g/km and 110g/km for the auto with average fuel consumption of 64.2mpg (automatic: 67.3mpg) for the 320d.

The 320d also gets the choice of the BMW xDrive all-wheel-drive system, married up with the auto and bringing emissions of 118g/km and 62.8mpg.

The 254bhp 330i, which comes with the auto, also brings torque of 295lb.ft and delivers official combined consumption of 48.7mpg and 132g/km.

The range will later expand 316i and 316d models featuring three-cylinder turbocharged engines, and offering CO2 emissions lower than 100g/km in basic form. Two plug-in hybrid options —  including a revised version of the existing 2.0-litre four-cylinder 330e and a three-cylinder version – will arrive later along with the 340i’s 3.0-litre six-cylinder engine, and the 330d six-cylinder diesel. A fully electric model is also on the horizon along with performance models.

Drivers can also now opt for the BMW Intelligent Personal Assistant, which learns routines and habits, and can respond to commands, for example to lower the music, and even provide casual conversation.