Pricing and specs revealed for new Audi A5 Sportback

Audi has opened order books for the new A5 Sportback just weeks after its debut at the Paris Motor Show. 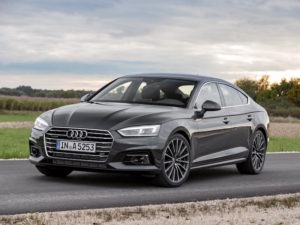 The new five-door model joins the Coupé, which was also revealed in Paris and has been available since late September. The Sportback model arrives a couple of months after the two-door variant in February 2017 and will be priced from £38,005 OTR.

Both models are offered in SE, Sport and S line specification in keeping with the rest of the Audi range.

SE models also provide an increased array of infotainment and driver assistance systems. These range from the Audi Smartphone Interface connection hosting Apple Carplay and Android Auto, and the front and rear Audi Parking System Plus to the Audi Pre-sense City automatic braking system and the Audi Connect Safety and Service package. Also fitted as standard is an embedded SIM card that enables occupants to dial an emergency or assistance call service with a one-touch button function inside the car.

Interior equipment includes front S super sports seats, combining lumbar support, pneumatic adjustment and a massage function and finished in Fine Nappa leather, plus MMI navigation plus and a three-year subscription to the Audi connect suite. S5 models can also be specified with a sport differential.

The new A5 Coupé and Sportback offer a choice of three TDI and two TFSI power units, covering 187bhp four-cylinder 2.0 TFSI and 2.0 TDI units, which can be configured with either a six-speed manual or 7-speed S tronic transmission, with the TDI also offered in an ultra version.