The UK’s premier eco-driving event has proven that even a performance car can be parsimonious, with a 5.0-litre V8-engined Ford Mustang taking the most coveted prize in this year’s event. 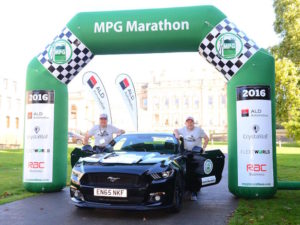 The Mustang, driven by Andy Dawson and Andy Marriott, achieved an overall MPG figure of 36.6mpg against a manufacturer’s combined figure of 20.9mpg on the MPG Marathon, an astonishing 75.12% improvement. This is the highest percentage improvement figure ever seen on the event.

Meanwhile, the best overall MPG figure from a conventional internal combustion engine car was 88.87mpg, achieved by John Kerswill and Ian McKean in a Mazda 2 1.6d Sports Nav, an improvement of 5.77mpg over the manufacturer’s claimed figure.

The highest overall figure was achieved by a pre-production Toyota Prius Plug-in Hybrid, with 109.14mpg achieved over the 387-mile route. At the UK’s average fuel cost of £5.20 a gallon, this equates to just £14.63 worth of fuel to drive a route equivalent to the distance between London and Glasgow by road.

In an event described by a number of competitors as ‘the toughest MPG Marathon yet’ and sponsored by RAC Business, ALD Automotive and Crystal Ball, drivers were charged with working out the most economical route between a number of waypoints in Oxfordshire, Warwickshire, Shropshire, Northants and Gloucestershire in a two-day event starting and ending at the prestigious Heythrop Park near Chipping Norton.

As well as the category winning cars, there were a number of quirky vehicles on the event including a fuel-cell powered Hyundai iX35 jointly entered by the University of Birmingham and Lex Autolease, a 750cc Moto Guzzi motorcycle, which achieved 86.87mpg, and an Australian-made V8-engined Vauxhall VXR Maloo ‘Ute’.

Event organiser Jerry Ramsdale said: “The diversity of vehicles in the event this year was tremendous, and showed just what can be achieved by adopting a level of eco-awareness from behind the wheel.

“The achievement of the crew in the Ford Mustang was astonishing – our highest improvement ever in the history of the event – and it shows that even the most potent performance cars can be relatively economical if driven sensibly.”

For the first time, fans of the event were able to track the vehicles’ progress live using telematics data supplied by sponsor Crystal Ball, which broadcast where each car or van was at any given time via the event website.

Results for the commercial vehicle category, which was also hotly contested, will be announced separately. To view the breakdown of all the winners and find out more about the event, go to www.thempgmarathon.co.uk