The Parliamentary Advisory Council for Transport Safety (PACTS) is calling for the introduction of harsher penalties for those flouting the seat belt law as research shows its role in saving lives. 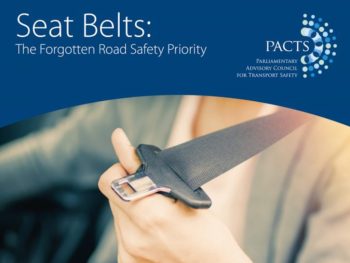 A new report by PACTS in association with Direct Line shows that more than one in four (27%) of those of those who died in cars on the roads in 2017 were not wearing a seat belt. This compares to 22% in 2014. Of the 787 people killed on the road in cars in 2017, over 200 were not wearing a seat belt. And more than 1,000 individuals were seriously injured in the same year for the same reason.

It’s only in Northern Ireland that failing to wear a seat belt carries three penalty points unlike England, Scotland and Wales. Yet 72% of the British public believe penalty points should be mandatory for those caught not wearing a seat belt.

Of those calling for the introduction of penalty points, 58% of the public believe three points would be an appropriate punishment. But 30% believe the penalty for breaking the law should be six points, the same as when using a hand-held mobile phone when driving. And one in 20 (5%) Brits even believe flouting seat belt laws should result in an automatic driving ban of at least three months.

As well as calling for the introduction of three penalty points for not wearing a seat belt, recommendations set out by Direct Line and The Parliamentary Advisory Council for Transport Safety in the new report include greater enforcement of the seat belt law through targeted, intelligence-led measures and increasing public perception of enforcement as evidence shows that this has a significant impact on seat belt wearing.

David Davies, executive director, PACTS, said: “Our report shows the road safety community has taken its eye off the ball. It points to ways to increase wearing among the minority who forget or choose not to do so. In particular, PACTS recommends making it an endorseable offence, with three penalty points. This would have no impact on most drivers or passengers but could substantially reduce the number of people killed or seriously injured each year.”

Gus Park, managing director of motor insurance at Direct Line, added: “Thirty six years ago mandatory seat belt wearing was introduced and has proved to be one of the most effective road safety measures in the history of motoring. It may not prevent collisions, but it can and does prevent death and serious injury.”