Featuring a refreshed look and a new three-cylinder 1.0-litre petrol, Volkswagen’s 2016 Up city car is now available to order. 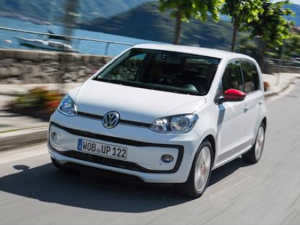 The refreshed Volkswagen Up

Priced from £8,995 (OTR), the four-seat model, which is offered in either three- or five-door configuration, brings an updated exterior with a new bumper and LED running lights plus revised radiator grille and bonnet.

The interior has been refreshed with a new steering wheel design and a revised dash.

Equipment is also upgraded. Three models are offered – Take Up, Move Up and High Up. The Take Up now gains ‘Composition’ infotainment system, remote central locking, electric front windows and driver’s seat height adjustment – an upgrade of £465 compared to the previous model but with the list price for the entry-level car up £20 to £8,995 (OTR).

The next model in the range is the Move Up, which adds 15-inch alloy wheels, a colour infotainment touch-screen with the ‘Composition Phone’ system and Bluetooth connection.

Engine line-up gains of a new 89bhp three-cylinder 1.0-litre TSI engine married up with a manual five-speed gearbox and a sub-10 second 0-62 mph time and a top speed of 114mph.

The Up range will also gain an electric version later this year, with full details to be announced in due course.