Turning to on-demand microtransit could enable cities to reduce traffic by 15-30% while also cutting pollution. 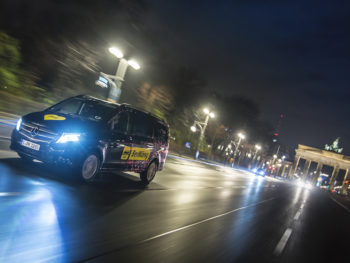 That’s according to a new study by Boston Consulting Group based on research carried out in the US and Europe under a joint programme with Via.

Published as local authorities increasingly look at measures to get drivers out of private cars, the organisation’s report covering, “On-Demand Transit Can Unlock Urban Mobility,” saw analysts study four unique on-demand, dynamically routed, multi-passenger transit projects over the course of a year – and the results indicate that on-demand transit offers an effective way for cities to maximise the value and ridership of existing transit systems.

“Our study showed that on-demand transit services work,” researchers concluded in the study. “In the right regulatory context, with lower per-passenger subsidies than those provided to comparable public services, these initiatives can benefit passengers and cities alike. Their convenience and flexibility improve the user experience over fixed-route mass transit while bringing good jobs within reach of neighborhoods poorly served by the status quo. They also generate less congestion and pollution than solo passenger travel.”

BCG researchers analysed four services in the US and Europe: Arlington On-Demand in Arlington, Texas; Via to Transit in Seattle, Washington; West Sacramento On-Demand in West Sacramento, California; and BerlKönig in Berlin, Germany — all of which are Via partnerships, though Via did not sponsor the report.

“On-demand transit services, on the other hand, can improve mass-transit usage when operators and local authorities work together,” wrote the researchers. “Services dedicated to the first and last mile, such as Seattle’s Via to Transit service and a similar pilot in Los Angeles, provide rides to and from public transit stations. Seattle riders can travel seamlessly using their light-rail fare card in Via vehicles. Even the more generic zonal on-demand transit services, meant to provide better transportation coverage, are helping to feed passengers to mass transit. In Arlington, 27% of the trips have been to or from the regional commuter rail station.”

On-demand transit’s role in reducing pollution was underscored by the research. Despite using petrol-powered vans, the West Sacramento and Arlington services annually save an estimated 60 and 150 tons of CO2 emissions, respectively, by aggregating passengers into shared vehicles and eliminating solo trips.

The authors also identified how on-demand transit can help reduce congestion. In Arlington, for example, the service helped eliminate nearly 400,000 miles of travel that would have occurred if the passengers had driven solo, corresponding to a reduction of 36% of total vehicle miles travelled.