Number of road fatalities in London only down slightly in 2020

Drivers in London are being reminded not to speed as new data indicates only a moderate decline in the number of fatalities last year despite lockdown measures. 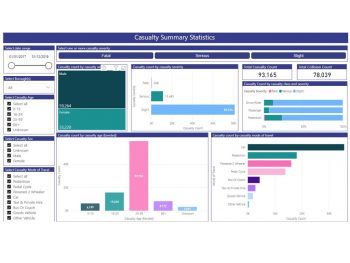 The provisional figures for 2020 show that 96 people died on London’s roads in 2020 – only down 23% on the figure of 125 in 2019, despite a significant reduction in journeys during the pandemic. Meanwhile, 31 motorcyclists were killed on London’s roads last year – equalling the 2019 total – with 45 people tragically dying while walking and six cycling.

The figures have been published by Transport for London as a reminder for Londoners to drive safely and within the speed limit – especially during the ongoing lockdown, as increasing numbers of people turn to walking and cycling. TfL has also reminded that unsafe driving puts additional strain on the NHS, which is already at risk of being overwhelmed.

Last year saw the police report several cases of extreme speeding – including speeds of more than 130mph recorded by the Metropolitan Police and City of London Police.

Joshua Harris, director of campaigns at Brake, said: “In previous lockdowns we saw a troubling increase in excessive speeding. Now, with the emergency services under more strain than ever, it is vital that drivers play their part in the national effort, only travelling if essential and always keeping well within speed limits.”

TfL has also introduced a new Vision Zero Dashboard, raising awareness of the number of devastating road collisions in the capital and to further its work on road safety.

Each year more than 4,000 people are killed or seriously injured on our roads and in July 2018 the Mayor, TfL and Metropolitan Police launched their Vision Zero Action Plan to eliminate deaths and serious injuries on London’s streets by 2041.

The Vision Zero Dashboard – located on the TfL website – presents collision data in a more accessible format with enhanced search tools, maps and data visualisation, highlighting the frequency and severity of collisions in the capital. It shows collision data from 2017 to 2019, and data from future years will be added in due course, with plans for further analysis capability including being able to identify casualty rates by kilometre travelled.

Brake’s Joshua Harris continued: “Eliminating road death and serious injury in London will require coordination, collaboration and effort from everyone with a stake in the safety of our roads – from the Mayor and TfL down to me, you and all road users. The Vision Zero dashboard lays bare the scale of the challenge ahead but will also be a vital tool to help us reach our goal – zero deaths and serious injuries, and safer roads in the capital for everyone.”