Drivers are being urged to comply with speed limits after a spate of “extreme” speeding over the Easter bank holiday saw one driver clocked at 151mph on the M1. 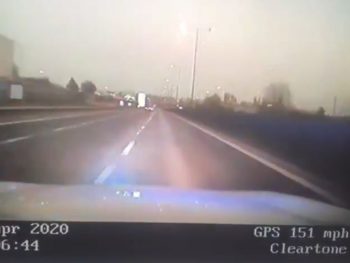 Tweets by Detective Sergeant Andy Cox, Scotland Yard’s lead officer on roads policing, have revealed a series of incidents over the weekend, including footage of the 151mph driver before he was stopped in a police chase and escaped from the vehicle.

Cox also revealed that a driver had been caught doing 97mph in a 40mph section of the A10 while reports also say there were six offences of +100mph on the A13.

And both Transport for London (TfL) and the police say there’s an increase in vehicles exceeding the speed limits on the capital’s roads during the lockdown, with some areas seeing average speeds increase by over 50%, as a small minority of drivers seek to take advantage of quieter traffic.

While Cox has issued his own plea for drivers not to add extra pressure to the emergency services at a time when they’re already stretched fighting the coronavirus epidemic, TfL has also reminded drivers that speeding is not acceptable, especially during this time of national emergency.

The latest statistics show a 68% reduction in the number of people killed or seriously injured on London’s roads since 20 March. But although there are fewer reported casualties, provisional data shows that when collisions occur, they are more likely to be serious or fatal, with drivers and motorcyclists showing the least significant fall in the most severe injuries. Tragically, seven people have died on London’s roads since 20 March, including three riding motorcycles and a cyclist.

Siwan Hayward, TfL’s director of compliance and policing, said: “We are doing all we can to ensure London’s critical workers – particularly those in the NHS – are able to travel safely to and from work. Simply put, no one should be travelling on the roads unless they’re making an absolutely essential journey, and that journey should be safe and under the speed limit.

“We’d like to thank those people who are listening to the Government’s guidance and also those who are using our roads safely, and for the right reasons.

“We want to remind all drivers that enforcing safe speeds remains a priority for TfL and the police. Breaking the speed limit is dangerous and especially reckless during this time of national crisis. Action will be taken against drivers who put themselves and others at risk.”

Joshua Harris, director of campaigns at the road safety charity, said: “There is never an excuse for speeding, it is a selfish act that increases the chance of a crash and endangers lives. With only essential travel permitted, we would hope to see speeding decline and so the reported increase is deeply concerning.

“We urge everyone to follow government guidance and stay home. For those driving for essential journeys, remember that any crash adds strain to our stretched emergency services and NHS so make sure to keep within speed limits at all times.”