Nissan is assessing locations for additional rapid charging points across the UK, with a view to supporting drivers without off-street parking and reducing bottlenecks in the existing network. 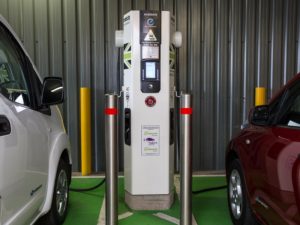 Working with Ecotricity, Nissan and Alliance partner Renault have been rolling out rapid charging points at service stations and Ikea car parks since 2012, as well as offering the service at some dealers. These can restore most of a typical electric vehicle’s range in around 30-45 minutes.

Nissan Europe’s electric vehicle director, Gareth Dunsmore, said the next phase will be to identify where vehicles are often waiting to charge, and to work with cities such as London, Nottingham and Newcastle, which have a strong green agenda, to install extra points in the middle of town.

In turn, Dunsmore hopes this will enable drivers living in flats or terraced houses to choose an electric vehicle without needing to drive to a service station for charging. The UK rapid chargers will be among 1,000 new units set to be installed across Europe over the next 18 months, building on the 4,600 Nissan already has in place across the region.

The carmaker is also finalising ways to use static electric vehicles as energy storage, enabling fleets to sell electricity back to the grid during periods of high demand.

“If you buy a fleet of vehicles from Nissan, we always look at a holistic offer,” he said. “It’s really important we’re seen as a brand who can manage the whole impact for a business and, in the future, connecting that to a broader energy saving or sustainability solution.”