Nissan has launched a new fast charger for fleets and business owners as it looks to spearhead the adoption of electric vehicles by businesses. 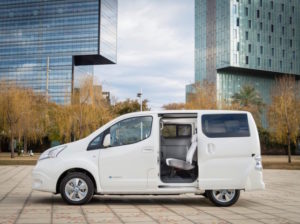 Unveiled at the carmaker’s third ‘Nissan Futures’ event in Oslo, Norway, the 22kW charger enables fleet drivers to charge Nissan electric vehicles in two hours, without the cost or supply upgrades of installing a rapid charger.

The solution forms part of its new 2018 range of home and office charging units, which also include a Nissan double speed 7kW home charger allows Nissan electric vehicle owners to achieve 100% charge in 5.5 hours. The outgoing LEAF could take a maximum 6kW charge in an AC supply.

The new charging solutions were unveiled as Nissan also announced its new longer range e-NV200 full-electric van.Subject to final homologation, the new model will offer a 174-mile range – up by 62 miles or 60% on the current model. The new model was announced as Nissan also gave the European premiere of the new LEAF,with a special ‘2.ZERO’ version for Europe.

Other significant announcements made at the event include a UK collaboration with emerging firm OVO that will enable customers to purchase an xStorage home energy unit at a discounted price, enabling them to ‘sell’ back energy to the grid – not only helping to offset grid demand issues but also expected to result in an additional expected income for users averaging £350 per year.

Paul Willcox, chairman of Nissan Europe, said: “Step by step we are removing any barriers to electric vehicle adoption – from infrastructure investment, to how people access the power itself.