Nissan has confirmed it’s now planning to bring production of all batteries for its Leaf EV to the UK, helping to avoid EU tariffs. 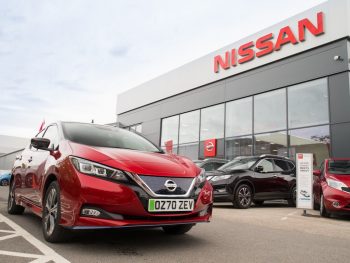 Although the batteries for its lower-range 40kWh Leaf model are already produced in Sunderland by its battery supply partner Envision, the batteries for the Leaf e+ model launched in 2019 and with the larger 62kWh battery are currently built in the USA.

Speaking to the BBC, Ashwani Gupta, the company’s chief operating officer, said that moving production to the UK will enable it to avoid tariffs on exports of the Leaf to Europe; the new trade deal sets out that at least 55% of a vehicle’s material value must come from the UK or EU to avoid penalties. Around 70% of the cars made in Sunderland are exported and the vast majority of them are sold in the EU.

He added that the move shows Nissan’s commitment to Sunderland for the long term.

The announcement was greeted by the Society of Motor Manufacturers and Traders (SMMT). Chief executive Mike Hawes said: “The news that the UK will be home to additional battery production in the North East is hugely positive and an essential step in the transformation of the automotive sector to electric motoring. It is an investment that is a direct consequence of the UK agreeing a deal with the EU and providing a much needed boost to the sector and region.

“The Road to Zero will require a rapid acceleration in the take up of these new technologies and massive investment in infrastructure and local capability. We have the scale – as a market and as a production location – to warrant the necessary investment but our attractiveness depends on maintaining these advantages and consistently enhancing our competitiveness. We need to build on this announcement, and implement a strategy which safeguards automotive manufacturing and delivers a rapid transition to the benefit of all of society.”

The UK Government has already announced big plans for EV battery production in the UK; the PM’s recently revealed 10-point plan for a “green industrial revolution” – which includes bringing forwards the 2040 petrol and diesel new car/van ban to 2030 – will be supported by an investment of more than £2.8bn in electric vehicles, “lacing the land with charging points and creating long-lasting batteries in UK gigafactories”.

The investment plans include nearly £500m to be spent in the next four years for UK battery manufacture, including in the Midlands and North East; part of a commitment to provide up to £1bn.