Introducing new levels of luxury, the new GLS raises the bar to compete with Range Rover and the BMW X7, coming to Western Europe in the third quarter of 2019. 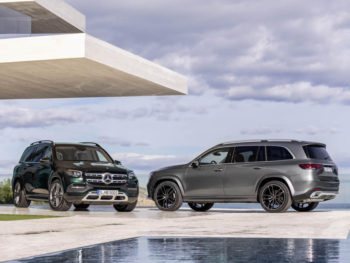 “The S-Class of SUVs”, claims Mercedes-Benz, the new GLS is the largest and most luxurious SUV the company offers. With a 60mm longer wheelbase and featuring a third row with fully electric adjustable seats, the new GLS is packed full of technology including rear seat entertainment, five-zone climate control and air suspension that can be lowered at the touch of a button.

A choice of two straight-six diesel engines power the GLS, depending on the particular market launch: GLS 400 d 4MATIC with 330hp and 700Nm torque (economy: 35.8-37.2mpg; CO2: 208-201g/km). In both versions, the engine already complies with RDE2, which should mean the cars receive a 4% BiK reduction and first year VED lowered by one band.

Even though the car does not feature a low-range transmission, its 9-speed automatic gearbox and 4MATIC all-wheel drive allows for a variable transfer of torque from 0-100% between the axles in order to aid off-road performance. Air-suspension is standard across the range, enabling variable ride height for either lower drag on motorways or a raised ride height for additional ground clearance when off tarmac.

Naturally, no luxury SUV worth its salt would be sold without the latest driver aids, which include ‘Active Distance Assist DISTRONIC’ adaptive route-based speed and cruise control, and a new Active Stop-and-Go Assist (part of the Driving Assistance package Plus) that assists drivers while in a traffic queue and takes into account signposted speed limits.

There’s plenty more on offer too, including optional Android tablet in its own docking station stored in the rear armrest, massage functions and MBUX rear seat entertainment system that sees two 11.6-inch touchscreens mounted on the back of the front seats to offer full infotainment options.

Pricing and availability will be announced in due course.