Local authorities and public sector and community organisations in Scotland are being encouraged to enter applications for funding to support e-bike, e-cargo bike and adapted bike projects. 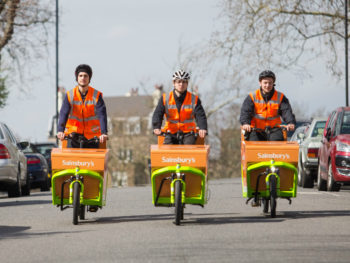 Trials with Sainsbury’s showed 96.7% of orders could be fulfilled in a single e-cargo bike drop

Following a successful first phase of the E-bike Grant Fund, Transport Scotland has made up to £500,000 available for a second round. The grant provides up to 50% of project costs. Application details for the second round of funding can be found via the Energy Saving Trust website, with application forms being available from Tuesday 9 October 2018

A total of 36 applications were made under the first round, including community groups right up to local authorities looking to facilitate large-scale public hire schemes.

Organisations to receive funding from round one include Arran Eco Savvy, which aims to lend e-bikes to businesses so staff can try commuting on two wheels.

Last month also saw the UK Government pledge £2m in funding for e-cargo bikes grants to help provide a zero-emission alternative to traditional last-mile delivery vehicles. The scheme was announced as part of the Zero Emission Vehicle Summit in Birmingham and follows the launch this summer of the last mile call for evidence, which asked for views on how electrically powered e-vans, micro vehicles and e-cargo bikes can provide better service to customers for cargo in comparison to light commercial vehicles.

Previous government-funded UK trials for e-cargo bikes in spring 2017 enabled London-based e-cargo Bikes to set up their first Micro Hub on an industrial estate in Islington from which grocery delivery trials with Sainsbury’s were conducted. The trials showed that 96.7% of orders could be fulfilled in a single e-cargo bike drop.

Previous: Less than a fifth of drivers aware of AdBlue
Next: Senior appointments at Aston Barclay