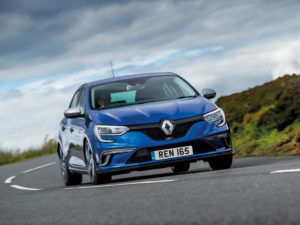 Priced from £27,740, the GT dCi 165 Auto EDC is available in both hatchback or Sport Tourer estate versions and is said to provide the most powerful 1.6-litre diesel available on the market today, with the new twin-turbo engine delivering 163bhp and 280lb.ft.

Ride comfort and handling has been enhanced thanks to specific springs, dampers and anti-roll bar settings by Renault Sport and the GT dCi 165 Auto EDC also features 4Control chassis with four-wheel steering, which means that the front and rear wheels turn in opposite directions, by up to 2.7 degrees at the back, at speeds of less than 37mph. This rises to at 50mph in Sport mode while at higher speeds the front and rear wheels steer in the same direction, turning by up to 1 degree at the back, for greater stability. This is underpinned by the 4Control system, which calculates the angle of the rear wheels 100 times a second and adjusts them as necessary.