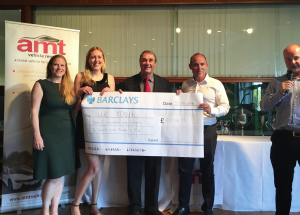 Growing national vehicle rentals group AMT Group, which has its head office in Leeds, has hosted a golf day in aid of charity UK Youth.

A total of 14 teams comprising suppliers, customers and manufacturers from around the UK joined AMT on 5 July at Moor Allerton Golf Club for the golf day and dinner, which was hosted by Nigel Mansell CBE.

The event, which included a charity raffle and a charity auction, raised over £15,000 for UK Youth, which delivers informal education opportunities for young people living in England, Scotland, Wales and Northern Ireland. This total was added to other fundraising undertaken that week by Mr Mansell, taking the total to over £30,000, which was donated to the charity at the AMT event.

The day included a number of competitions with the Best Team Score competition being won by S&G Response.

“As well as supporting a worthwhile charity, our inaugural golf day was a great opportunity to bring together our suppliers and customers from around the country to enjoy a round of golf in a fabulous Yorkshire setting, while also giving them valuable networking opportunities,” said Neil McGawley, managing director of AMT Group.

He continued: “We are incredibly lucky to have Mr Mansell hosting the event in his capacity as president of UK Youth.”