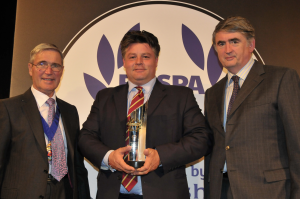 RoSPA has announced the winners of its occupational fleet safety awards.

The safety charity has revealed that NFT Distribution Operations Limited – Bristol has landed the Fleet Safety Trophy, and Tristar Worldwide Chauffeur Services has picked up the Fleet Safety Technology Trophy, as part of the 60th RoSPA Health and Safety Awards.

Sponsored by Allianz, the Fleet Safety Trophy honours the organisation which demonstrates the most effective and cohesive programme for the management of occupational road risk, supported by historical performance data.

“An example of this can be found in the way they have made their internal fleet safety audits far more challenging. They also now include all office and warehouse staff in inductions provided by their own in-house trainers/assessors. Their internal standards can also be seen in the fact that all HGV drivers are now fully qualified in NVQ Level 2 Driving Goods Vehicles, another improvement which has been made since last year’s awards round. These improvements are also bearing fruit, evidenced by a steadily decreasing rate of vehicle accidents.”

Middlesex-based Tristar Worldwide Chauffeur Services has been announced as the winner of the Fleet Safety Technology Trophy, sponsored by Tesco Dotcom, which recognises an organisation’s commitment to using the latest technology to keep those who drive for work safe from harm – from “black box” telematics to e-learning and social media.

Kevin Clinton said: “Tristar Chauffer has evidenced an excellent, comprehensive system for the management of its fleet and occupational road risk. This is being carried out by a very committed leadership, who place a strong emphasis on ensuring completion of systems and procedures.

“Their commitment to using technology to improve safety within their fleet can be seen in many ways, such as the addition of autonomous braking to their vehicle ordering specification, to further reduce the likelihood of low-speed accidents in busy city traffic.”