Leeds City Council has abandoned plans for a charging Clean Air Zone as a result of a “dramatic shift” by businesses to cleaner vehicles. 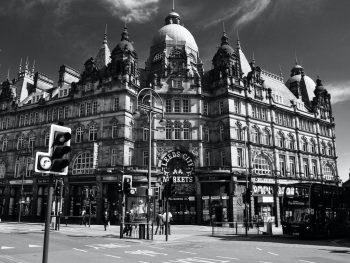 Leeds said it’s achieved the aims of the Clean Air Zone without having to charge a single vehicle, but is now exploring voluntarily introducing stricter targets

The ‘Class B’ scheme – which would have levied charges on coaches, taxis, PHVs and HGVs but not vans or cars – has been on hold for some months after pollution fell due to the pandemic, and a joint review by Leeds City Council and central government has now concluded that it’s no longer needed.

Although the city was one of five named in the December 2015 UK Air Quality Plan as needing to deploy a CAZ by 2020, the scheme was initially delayed due to government issues with its vehicle checker system and postponed several times since due to the pandemic and concerns over the impact on drivers and businesses.

A statement was expected in the autumn but the joint review has now found that air pollution in Leeds on key routes is below legal limits due to the dramatic shift to cleaner vehicles; more than 90% of buses and 80% of HGVs driven in the city now use cleaner Euro 6 engines and therefore wouldn’t be charged if a zone were introduced. Nearly half of the city’s licensed taxi and private hire cars are also now hybrid or electric, while infrastructure improvements and fast-rising take-up of ultra-low emission vehicles in Leeds have also contributed.

The review also found that legal levels of air pollution are not likely to be exceeded — “even if traffic were to return to ‘normal’ levels or slightly higher”.

Leeds’ announcement comes hot on the heels of confirmation by Bath and Birmingham that they will push ahead with their charging Clean Air Zones, which are due in March and June 2021 respectively, and the decision by Leeds to abandon its own scheme has been slammed by ClientEarth. The environmental law charity has repeatedly urged for such zones to still go ahead.

Andrea Lee, clean air campaigns manager at ClientEarth, said: “Leeds is not out of the woods yet with its toxic air pollution problem, but it’s abandoning the one measure guaranteed to protect people in the shortest possible time.

“While the promise of a Clean Air Zone has prompted drivers and businesses to switch to cleaner vehicles, the latest reported air pollution measurements from the council still show that parts of the city are over national air quality standards.

“With Covid-19 endangering people’s respiratory health, rowing back on a measure that has been proven to reduce pollution seems not only illogical but reckless – leaving Leeds unprotected as other cities implement their own Clean Air Zones.”

However, Leeds City Council has said senior councillors will discuss proposals to voluntarily introduce new air quality targets that go further than the national standards at a meeting of the council’s Executive Board next week.

Leeds has also written to the Government requesting to keep £6.9m of previously-secured CAZ funding to ‘lock in’ the full extent of air quality improvements. The money would be used to continue offering grants to help local businesses switch to cleaner vehicles as well as to provide free licensing costs to drivers of less-polluting taxi and private hire cars.

The council will also keep and repurpose the ANPR camera infrastructure that would have been used to enforce the zone – which could be brought into play “in the unlikely event that air quality declined for any reason” and the Government greenlighted a Clean Air Zone.

Councillor James Lewis, deputy leader for Leeds City Council and Executive Board member with responsibility for air quality, said: “When we consulted on the CAZ in 2018, we said that we hoped that no one would be charged because businesses would switch to less-polluting vehicles before the charging system takes effect. That is exactly what has happened.

“We have achieved the aims of the Clean Air Zone without having to charge a single vehicle. If Leeds were to introduce a CAZ today, only a fraction of vehicles would be affected because the vast majority of businesses are now driving cleaner vehicles than they were just a few years ago.”

He added that the council also recognises that air pollution remains the biggest environmental threat to our health.

“That’s why we’re considering voluntarily introducing even stricter targets for Leeds, aligned with WHO guidelines. We will continue working hard to protect the health of everyone in Leeds from the effects of polluted air,” he stressed.

Previous: BMW and Mini batteries to get second life as mobile power units
Next: Used car values up 3.9% in ‘strong’ September market