Kia has published full UK specification details for the plug-in hybrid versions of its XCeed and Ceed Sportswagon; the first plug-in hybrids in the Ceed range. 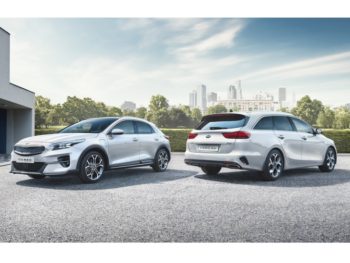 Launched at the start of the year as the brand also announced heightened plans for fully electric vehicles – and ready to start deliveries as soon as the Covid-19 lockdown lifts, they’re also the first plug-in models built by the brand in Europe and feature a plug-in hybrid powertrain combining a 1.6-litre four-cylinder petrol along with a 44.5kw electric motor and an 8.9kWh battery pack. This gives an electric-only range in City mode of 35 miles for the Ceed Sportswagon PHEV and 34-37 miles for the XCeed PHEV. The powertrain is covered by Kia’s usual seven-year, 100,000-mile warranty as standard and extended to cover the battery pack and motor.

Both models get a six-speed dual-clutch auto transmission rather than an e-CVT and have a combined system output of 141hp and 265Nm, enabling the Ceed Sportswagon PHEV to accelerate from 0-62mph in 10.5 seconds, and the Kia XCeed PHEV in 10.6 seconds.

Prices start at £30,695 for the Kia XCeed PHEV, available with a choice of ‘3’ or ‘First Edition’ trim levels while the Ceed Sportswagon PHEV is available exclusively in ‘3’ specification, priced at £29,995.

They also get a towing pack; both models can tow a braked trailer of up to 1,300kg, which is unusual for plug-in hybrids.

Owners can use the touchscreen system to schedule when their vehicle should charge when plugged in at home, enabling owners to take advantage of cheaper off-peak energy tariffs.

A reversing camera is also integrated into the touchscreen, with dynamic guidelines, and the system features DAB radio as standard, as well as steering wheel controls and seven speakers. Apple CarPlay and Android Auto smartphone integration with voice control is included, as well as multi-connection Bluetooth.