A fleet of 200 electric Jaguar I-Pace are to be used as a luxury chauffeur service operating to and from Heathrow airport. 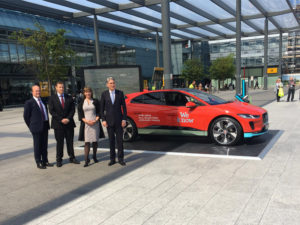 The deal between Heathrow, Jaguar and WeKnowGroup will see the creation of the largest chauffeur-driven fleet of electric vehicles in the UK and will operate to and from Heathrow airport that handles 70 million passengers each year.

Peter Buchanan, CEO, WeKnowGroup said: “Today’s agreement extends our deep, long-standing relationship with Jaguar which has allowed us to proudly claim that we run the largest chauffeured executive Jaguar fleet in the UK.”

Initially, the fleet will consist 50 I-Pace with a the option of a further 150 vehicles to join the fleet over the next 12 months. The vehicles are anticipated to cover 1,000 electric journeys each day, which should save around eight tonnes of NOx emissions each year.

Jeremy Hicks, Jaguar Land Rover UK MD, said: “Through our partnership with Waymo (formerly Google self-driving car project) and this latest deal with Heathrow and WeKnowGroup, we’re excited to be bringing the electric future to more people than ever before.”

A dedicated charging hub will be created at Heathrow to support the vehicles.

According to new consumer research, 32% of London-based travellers to Heathrow said they would be fairly likely (22%) or very likely (9%) to use electric taxis to access the airport if these were made more available.

Heathrow’s Emma Gilthorpe, executive director, said: “We will not compromise on our commitments to the environment and our local community and we remain focused on addressing the impact road vehicles have on air quality on the roads around the airport. These Jaguar I-Pace are the latest in a long line of initiatives we are taking to ensure that we do not force a choice between the economy and the environment – and that we can deliver benefits for both.”

Heathrow already operates one of the largest corporate electric fleets and recently signed up to the EV100 global initiative.