Nissan has reported high levels of new and used demand for its Leaf electric vehicle for fleets, helping to support strong residual values. 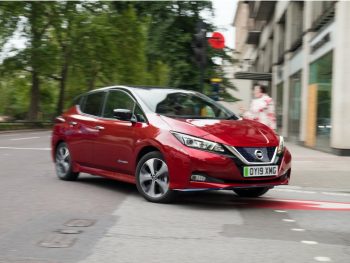 Nissan is now achieving 103% on CAP Clean across all its remarketing activities for the Leaf. It previously tracked CAP Clean at 100%

Peter McDonald, Nissan GB’s fleet director, said that SMMT data shows UK fleets have increased their purchases of battery electric vehicles three-fold since April and this rising demand for EVs has led to a “massive increase in interest” on both new and used Leafs; the model has a 41% share of the UK’s used electric passenger car market and demand significantly outstrips supply.

Commenting on the fast-rising interest in new and used Leafs, McDonald added: “Really positively within this sales mix, the majority of the demand has come from company car drivers and government institutions who typically hold the vehicle for three to four years.

“The effect on our own remarketing is clear. There are fewer examples of Leaf in the young used market, there’s a big appetite to purchase the small number of vehicles available and they’re only dwelling a few days before sale. Our own remarketing performance has improved against last year’s relative position to CAP Clean by three percentage points,” he continued.

As a result of this, Nissan is now achieving 103% on CAP Clean across all its remarketing activities for the Leaf. It previously tracked CAP Clean at 100%.

Nissan outlined that the significant improvement in these used values has also been generated from wholesale remarketing efforts, supported by Nissan dealers across the board.

The Leaf’s used car credentials have now been reinforced by three industry accolades from the consumer champions at Which? alongside automotive title What Car?

And consumer champion Which? Magazine has named the first-generation Leaf a ‘Best Buy’ for 2020 in its annual reliability survey.