Hyundai is introducing a performance-inspired version of the i10, bringing increased power, chassis enhancements and a number of styling additions. 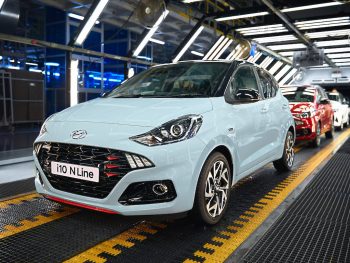 Joining the range for the recently launched third-generation city car at the end of July and priced from £16,195, it follows in the footsteps of other N Line models and takes its inspiration from the i30 N hot hatchback.

It’s powered by a 1.0-litre turbo GDi petrol engine with 100hp and 172Nm torque, bringing increased power for the line-up but without too much of a hit on emissions. The WLTP-rated CO2 figure stands at 123g/km with 52.3mpg combined fuel consumption while 0-62 time is 10.5 seconds with a 115mph top speed.

Equipment is carried over from the rest of the range and includes an 8-inch display audio system with Apple CarPlay and Android Auto and Bluetooth with steering wheel controls and voice recognition. Drivers can also opt for Tech Pack (£1,000) that brings both navigation and Hyundai’s Bluelink telematics system, provided via a free-of-charge five-year subscription and wireless charging for compatible devices.