Two Honda teams are ramping up for next week’s MPG Marathon as they look to build on their previous successes. 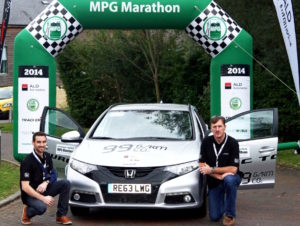 Honda’s bid for victory in the 2016 MPG Marathon, which takes place on 18-19 October based at the Heythrop Park Resort in Oxfordshire, will see the return of Honda R&D engineer and MPG Marathon veteran, Fergal McGrath, who will share the two-day drive with colleagues Kyle Stevens, Rick Rowles and Jeremy Sibson behind the wheel of a Honda Civic Tourer 1.6 i-DTEC.

Fergal and his colleagues in R&D also celebrated triple victories in the 2014 event, scooping the ‘Best overall MPG’ prize (97.92), as well as the ‘Best MPG’ and Best percentage improvement’ awards in Class Three.

Making up the other half of Honda’s assault on the 2016 MPG Marathon will be the BBC’s transport correspondent for the South of England, Paul Clifton, alongside former police inspector and now regional service delivery manager (south) for IAM RoadSmart, Shaun Cronin.

Once again behind the wheel of a Honda CR-V 1.6 i-DTEC, in which they won ‘Best overall percentage improvement’ in last year’s competition, Paul and Shaun are out to retain their title which saw them bring the CR-V home after 380 miles with an MPG of 84.34, a 31.37% improvement on Honda’s quoted figure.

Both Honda teams are very optimistic about getting behind the wheel for the 2016 competition, looking to build on their previous successes by targeting the ‘Most Fuel-Efficient Family Car’, ‘Four Wheel Drive’ and ‘Load Lugging Economy Champion’ awards.

Fergal McGrath commented: “We’re really looking forward to taking on the challenge of the MPG Marathon again, and hopeful that we can bring home a good result. This event is the perfect platform to demonstrate what incredible real-world fuel economy many modern cars can achieve when the driver adopts just some simple and effective techniques which anyone can do. Whatever the result, it’s always good fun, and promises much friendly rivalry with several familiar faces battling it out to squeeze every mile they can out of their fuel tanks.”

Shaun Cronin added: “In both my role with IAM RoadSmart and previously in the police I’ve always been interested in eco-driving. Beyond the obvious environmental and cost benefits, a driver with an eye on fuel economy is also a safer driver. This is due to their enhanced observation, anticipation and planning skills, they are much more aware of what is going on around them and therefore better able to react effectively. On a personal note I have always really enjoyed the challenge of this excellent event, and once again look forward to teaming up with Paul to see if we can retain our title!”

Although the 2016 MPG Marathon is already heavily subscribed, there are a limited number of last-chance spaces still available for vehicle manufacturers, fleet operators, dealer groups or even individuals to take part.